Boko Haram Waited In Ambush For Our Foods - Army


They were however able to fight through the ambush and also recovered two AK-47 rifles. 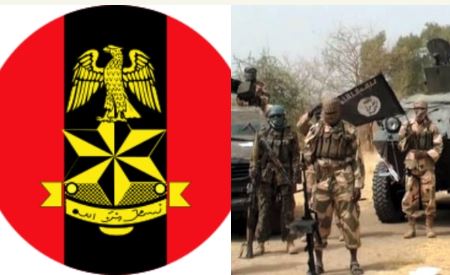 File Photo
The Nigerian army has disclosed that Boko Haram insurgents waited in ambush for troops of the Nigerian Army at Wala village in northern Borno State, to steal foods being conveyed to the military base.
Col Sagir Musa, the acting Director, Nigerian Army Public Relations who confirmed that the Boko Haram insurgents waited in ambush for the food conveyed to troops of 26 Brigade Garrison, disclosed that soldiers were on patrol and escort duties of civilian merchants and commuters along Wala village on Saturday when they ran into the insurgents, who opened “heavy gunfire on them.” They were however able to fight through the ambush and also recovered two AK-47 rifles.
Musa said, “During the encounter, troops responded with heavy gunfire, exterminated two terrorists and captured two AK-47 rifles. Subsequently, intelligence revealed that the terrorists were informed by their informants of the troops’ movement, wanting to use the opportunity to grab foodstuffs.”
Top Stories