Security operatives have nabbed a man who sold his little baby after conspiring with another man. 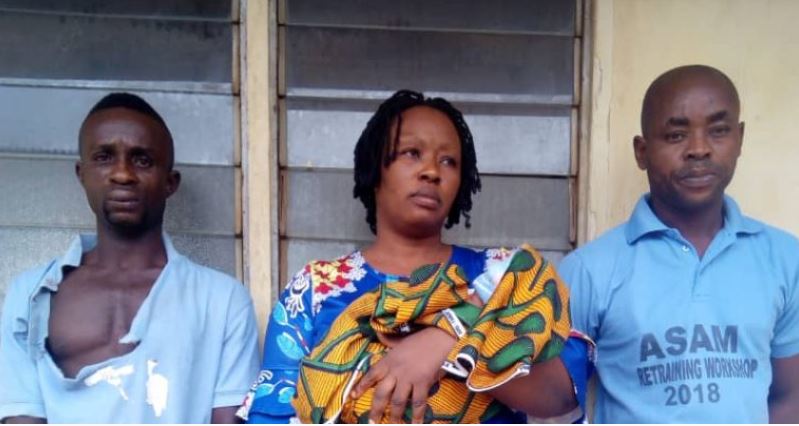 The suspects
A 27-year-old man, identified as Chukwuma Enemuo has allegedly sold his three-day-old baby boy for N150,000 in Anambra State, Punch has reported.
It was gathered that the baby was his first child.
The incident occurred in Ozubulu in the Ekwusigo Local Government Area of the state.
A  source said the man who conspired with a 45-year-old man, Obi Chidubem to sell the baby to one Anulika Okafor, had lied to his wife that their baby had died shortly after birth.
Our correspondent gathered that the business went awry when a neighbour reportedly revealed the development.
The Police Public Relations Officer in the State, Haruna Mohammed confirmed the incident to our correspondent.
He said the baby had been recovered in good condition while the matter was being investigated.
Mohammed said the incident occurred on Monday and the three suspects in the incident have been arrested.
He said, “The Police detectives attached to Ozubulu division arrested one Chukwuma Enemuo, aged 27 years of Okwutu Amawka village, Ozubulu in Ekwusigo LGA of Anambra State.

“The suspect conspired with one Obi Chidubem, aged 45 years of Umuabuche Eziama village, Uli in Ihiala LGA and sold his three-day-old baby boy for the sum of N150,000  to one Mrs Anulika Okafor aged 39 years of Uruokwe village, Ozubulu.
“The Suspect lied to his wife, one Oluchi Enemuo, aged 20 years of Okwutu Amakwa by telling her that the baby is dead shortly after delivery.
“All the three suspects have been arrested, the baby was also recovered. The case is under investigation after which suspects would be charged to court.”
Top Stories