Customs Officer Shot Dead In An Ambush By Suspected Smugglers


An officer of the Nigeria Customs Service has been killed in an ambush by smugglers. 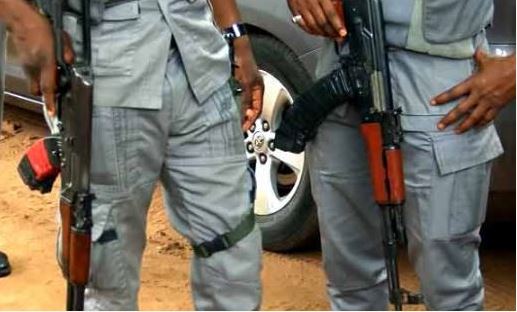 File photo
A Customs officer attached to the Federal Operations Unit (FOU), Zone A in Lagos, Yakubu Shuaibu, was on Sunday shot dead by suspected smugglers in Ogun State.
Jerry Attah, the FOU spokesman, who confirmed the incident on Monday, said the victim, an Assistant Superintendent of Customs, was killed at Akinrun village, Oja – Odan axis in Yewa North Local Government Area.
The smugglers, who ambushed the operatives who were on patrol, also injured one of them, identified as Joseph.
The patrol team was returning to its base, having just impounded smuggled rice, when the suspected smugglers launched the attack.
Mr Attah disclosed that the slain officer had been buried according to Islamic rites in Abeokuta, Ogun state capital.
“They were on a patrol; they had made seizure of smuggled rice. While taking the rice to their base, they were ambushed. The officer was shot on Sunday, but he died today.
“He has been buried according to Islamic rites. No arrest has been made. The investigation is still on,” he explained.
In January, a similar incident occurred when suspected smugglers killed a customs officer, Hamisu Sani, and injured another, Tijani Michael, during an ambush at Asero community in Abeokuta.
Communities in Ogun State that border Benin Republic are major smuggling routes into Nigeria. Some of the goods smuggled through the border communities are cars, bags of rice and poultry products.
Top Stories