AFCON 2019: Rohr Reveals How He Feels About Super Eagles Qualification


The Super Eagles became the first team to advance to the knockout round of the Africa Cup of Nations after Wednesday's win over Guinea. 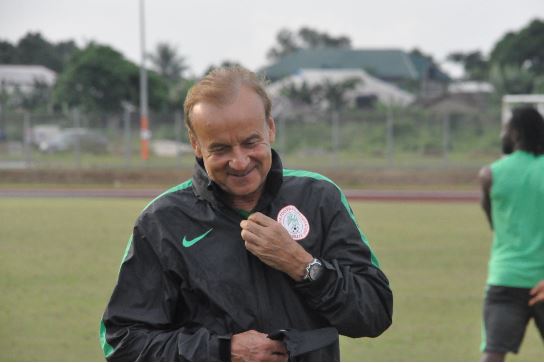 Gernot Rohr
Nigeria coach Gernot Rohr is reveling in his team’s performance after their 1-0 victory over Guinea in their second Africa Cup of Nations Group B game.
A second-half header from Kenneth Omeruo was enough for the three-time African champions to edge their West African rivals at the Alexandria Stadium.
The victory stretched Nigeria’s tally at the summit of Group B standings to six points after two games and also secured their progress to the Round of 16.
In his reaction to the result, Rohr expressed satisfaction with his team’s display against the Syli Nationale and he is now aiming to end their group outing on a high against Madagascar on Sunday.
“It was a good performance from the team today, we played really well though it was a tough game from Guinea," Rohr said after the game.
“I am happy we could deal with the danger they posed and being the first into the round of 16 is a joy for us.
“Now we have to ensure we finish off well against Madagascar in our last game to top the pool.”
Nigeria will battle Madagascar in their final Group B game at the Alexandria Stadium on June 30.
Top Stories