Former Imo State governor, Rochas Okorocha has reacted after he was accused of being in possession of government vehicles. 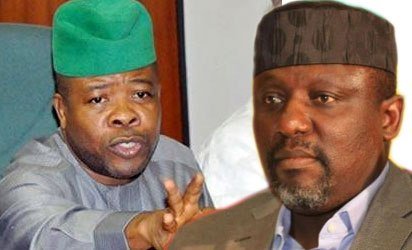 Ihedioha and Okorocha
The former governor of Imo State and Senator representing Imo West, Rochas Okorocha, has given the Imo state government, a seven-day ultimatum to substantiate the allegation that his wife and family members made away with 57 vehicles another property belonging to the state, The Nation reports.
Okorocha challenged the state government to publish the particulars and li of the vehicles and details of the N50 billion allegedly diverted by his family.
The Imo State Committee on Recovery of Government Property headed by Hon Jasper Ndubuaku had on Wednesday, accused the former governor and his wife of making away with 67 vehicles belonging to the state government.
But the Media  Adviser to the former governor, Mr. Sam Onwuemeodo in a statement, noted that, “the media had quoted the Chairman of Governor Emeka Ihedioha’s Committee on Recovery of Government Properties, Mr. Jasper Ndubuaku as claiming that the former Governor of the State, Owelle Rochas Okorocha and the wife, Nneoma Nkechi Okorocha left with 67 Vehicles and N50 billion. They also made similar claims against appointees of the former governor and other related bodies that worked with the last administration.
“Against the backdrop of these repeated claims, we want to respond in this manner; We Challenge Governor Emeka Ihedioha and his appointees to publish the list and particulars of these 67 vehicles and the details of the N50 billion the former governor and the wife made away with vis-à-vis other items thereto. And we give them 7 days to do the Publication or bend their heads downward in shame”.
The statement continued that, “we also challenge them to publish the properties the former appointees must have left with, either as a group or as individuals. The burden to publish evidence of all these claims is now on Governor Ihedioha and his appointees.
“We equally want to ask that they harmonize their claims because almost all the key appointees of the WhatsApp and Face-Book government in the State have made their diverse Claims on these issues, to the extent that nobody knows who among them should be believed. They should harmonize their claims before the publication.
“The governor himself had made his own claim talking about Cars and N70billion taken away. The Chief of Staff of the governor had equally claimed that the former governor left with 31 Vehicles and about N40 billion. Now the Chairman of the Recovery of what they call government properties, Mr. Ndubuaku has come up with the latest claim of 67 Vehicles and N50 billion. The new Attorney-General, Barr. Ndukwe Nnawuchi has also added his voice by also making the claim of N20 billion against the former governor.
“We want to let Nigerians know that the PDP people in the State are doing their Campaign for possible re-run because they know that, in all considerations, Chief Ihedioha never won that election. All these smear Campaigns against Owelle Okorocha and the wife are geared biasing the minds of Imo people against their beloved former governor in preparation for the possible re-run. This is the fact”.
According to the statement, “that is also the reason no day passes without their making one invalid claim against the former governor or the other. If they are not talking about the flyovers built by the former governor being death traps, they would talk about the tunnels not properly built or about vehicles and money taken away.
“They have equally embarked on systematic looting and diverting the attention of Imo people with their repeated claims over non-existent issues. They are also insulting the former governor and the wife by talking about cars taken away.
“We have also taken cognizance of the threat Mr. Ndubuaku issued about mobilizing 6000 youths to go against those he claimed carried away government properties. We are happy that such threat has come from them. And they have only succeeded in putting us on notice. We are now left with no option than to keep our fingers crossed and watch events as they unfold.
“And with the stories associated with the Vehicles at the National Assembly when the governor was leaving as Deputy Speaker, they think that any other person could do such a thing. The PDP people behave like locusts or vampires and they see every other person from that dimension.
“Finally, Nigerians should ignore them until they muster the courage to publish what they have claimed. Since the burden or the yoke of proof is always on the neck of the accuser”.
Top Stories