Twelve Persons Injured As Another Building Collapses In Iju


Twelve persons have been injured in an unfortunate building collapse which happened in Lagos. 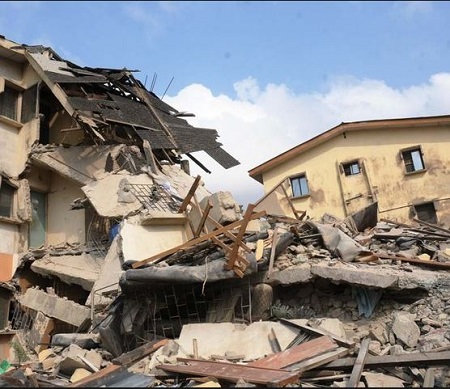 A building collapsed in Fagba near Iju, Lagos on Wednesday, five days after a similar incident in Mafoluku Oshodi.

The building, which was under construction, fell around 11.05pm.

Twelve persons were injured in the incident. They were treated and discharged on the spot.

The building has been pulled down by officials of the Lagos State Emergency Management Agency (LASEMA).

LASEMA Chief Executive Officer Dr Olufemi Oke-Osanyintolu said preliminary report showed that the collapsed was caused by the use of substandard materials.

“Fortunately there was no loss of life in the incident due to the prompt response of the agency. All the 12 victims were rescued including one trapped adult male and were all treated and discharged immediately at the spot of the incident.”

He explained that the agency with the use of the excavator pulled down the building to ensure the safety of lives and properties of those living in the adjoining buildings.

Oke-Osanyintolu urged contractors and developers to abide by building codes and regulations to prevent an unnecessary collapse of buildings.

Other relevant government agencies, he said, had been contacted for further investigation as to ascertain the real cause of the incident to prevent a reoccurrence.
Top Stories