Nigeria is the only country I have noticed that its government is stronger than the people. 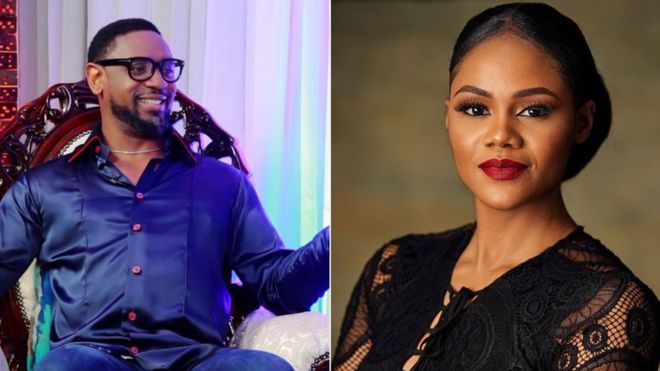 Pastor Abiodun Fatoyinbo and Busola Dakolo
Leadership is not the only problem in Nigeria. Followership is the worse of all Nigeria's Social, Political, psychological and economic problems.
I have tremendous respect and regards to youths in countries like Algeria, Venezuela, Brazil, Kenya, South Africa, Sudan, Liberia, Sierra Lone and presumably, the youths of the Congo and the Gambia among others.
I have watched governance activities in Nigeria since 2003, the leadership maybe bad as postulated, but followers are distracted and don't really know what they should demand from the powerful in the Society.
Nigeria is the only country I have noticed that its government is stronger than the people. In other climes, the masses are stronger than the government.
Again, in Nigeria, whatsoever the government does, some groups will support and other groups will remain opposed while the others will be neutral.
There is no collective unity in Nigeria. Everything the leadership choose to do must get approval from a certain facet of the citizenry.
It is troublesome and worrisome indeed to see Nigerians especially the youths misbehaving despite their certificates and degrees acquisition.
WHAT MAKES OTHER YOUTHS TO PROTEST IN OTHER COUNTRIES:
1. Bad or unfavorable governance
2. Lack of core basic amenities like roads, water, health insurance or healthcare, and education.
3. Threat to their lives like an alien invasion.
4. Insecurities, insurgencies and insurrections.
5. High level of inequality, unemployment and poverty.
6. Unclear governmental policies and programs
7. Unfulfilled promises of government to the people.
8. Dictatorial and anarchical cum fascist and militaristic government.
9. Lack of constitutional due process and absence of constitutionalism.
10. Threat to national symbols and image.
11. Judicial, legislature and executive disregard to the people and national common goals etc.
THINGS THAT MAKE NIGERIANS YOUTH TO PROTEST
1. Rape
2. Gossip
3. Fallacy, illusion and phantasmagoria.
4. Ethics argument
5. Dressing of others.
6. SAS
7. Religion superiority and intolerance
8. Attacks on pastors
9. Anti tithing
10. The lifestyle of pastors etc.
I wasn't interested in knowing what happened between the pastor of COZA and the lady in question. Certainly, another lady has written on how she was allegedly raped by a popular pastor at Ikotun axis of Lagos. And I am not defending the accused or the accuser.
My point is this, must the youth protest irrelevant things in Nigeria?
I recall sometimes back, Tuface wanted to lead a national protest against what he perceived as bad governance, these same Lagos, Ibadan and Abuja big boys and big girls rained insults at him and he has to put off the plan. It was Chally Boy that later summon courage to protest for some days, you know how his protest ended, Nigerian youths attacked him around Wuse market. Let me be fair to the Bishop who protested alone in Osun state. Even if the youths want to protest, must they desecrate the holy and hallowed day of Sunday? Why can't they protest on another day? This is a hydra intentions protest.
Since 2015, I have not seen these Social media youths protesting against any ill in Nigeria. This shows that rape and sex is the problem of Nigeria youths.
Finally, don't blame Nigeria government, both present, past and the future. Nigeria youths don't know what to demand from the government.
Keep protesting against rape, don't protest against your state governors who are milking your states. Don't protest for the interest of unborn Nigerians. Keep deceiving yourselves.
As the youths think in their hearts so they protest. Go and learn protest from South Africa, Sudan, Venezuela and Algeria youths.
Note: Nigeria youths graduated from professor Woke Soyinka plane seat issues to COZA rape scandal. Wait a little, this week, they will protest against another irrelevant thing.
I think it time the Nigeria government should regulate Social media. The abuse of freedom of information and speech on Social media is getting worrisome attention. If this independent is allowed without control, Nigeria youths will keep relegating our image. Youths in other countries are laughing at us. Can youths from the Republic of Ghana protest against a church and rape case? Not even when a court of competent jurisdictions is yet to hear the case. This is sickening and disheartening.
This publicity transcends all axis. It is both an observatory and corrective post.
Rwang P.S.
Top Stories