Evans had approached the appellate court to challenge the jurisdiction of the lower courts in the State to continue his trial. 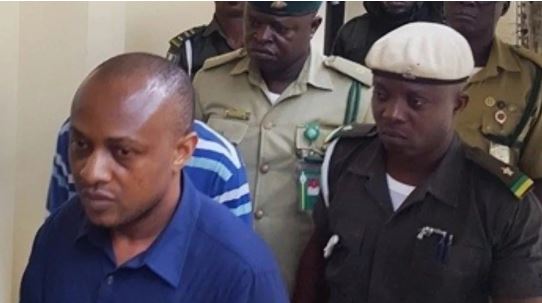 Chukwudumeme Onwuamadike, also known as Evans
The Court of Appeal in Lagos has dismissed three appeals by suspected billionaire kidnap kingpin, Chukwudumeme Onwuamadike, also known as Evans, seeking to stop his trial at two high courts in Lagos State.
Evans had approached the appellate court to challenge the jurisdiction of the lower courts in the State to continue his trial.
However, a three-man panel of the Court of Appeal led by Justice Jummai Sankey held that Evans’ appeals against the Ikeja High Court were without merit.
Other Justices on the panel were: Justice Philomena Ekpe and Justice Muhammed Mustapha.
In the three appeals, the suspected kidnapper challenged the High Courts’ jurisdiction and sought to strike out and quash the kidnap, attempted murder and murder charges filed by the government against him.
In the first appeal against the ruling of Justice Oluwatoyin Taiwo of an Ikeja High Court, the first to fourth respondents were: the Lagos State Government and Evans’ co-defendants; Joseph Emeka, Chiemeka Arinze and Udeme Upong
Justice Taiwo, on November 10, 2017, dismissed Evans’ application seeking to quash an amended seven-count charge against him, dated October 26, 2017.
The applicant also challenged the Ikeja High Court’s jurisdiction in the second appeal, where the respondents were the same.
The appellate court consolidated both appeals as Justice Sankey held: “The appeals are hereby dismissed. The ruling of the lower court is affirmed. I hold that the lower court has jurisdiction to continue with the trial and to entertain all the counts of the charge.”
In the third appeal, the first to fifth respondents were Lagos State and Evans’ co-defendants: Uche Amadi, Ogechi Uchechukwu, Chilaka Ifeanyi and Victor Aduba.
Evans claimed that Justice Hakeem Oshodi erred in law when he held that the amended information/charge dated October 19, 2017, filed by the first respondent, was incompetent without an accompanying or attached proof of evidence as required by law.
But Justice Philomena Ekpe, who read the lead judgment, dismissed the appeal as being unmeritorious.
Justice Ekpe held: “Accordingly, this appeal is adjudged unmeritorious. It fails and is therefore dismissed in its entirety. The ruling delivered by the lower court by Justice Oshodi on November 3, 2017, in suit NO ID/5970C/2017, is upheld. I make no order as to cost, appeal dismissed.”
Top Stories