The Deputy Governor said a section of the expressway from Agboju, a suburb of Lagos to Trade Fair complex will be completed before the end of the year. 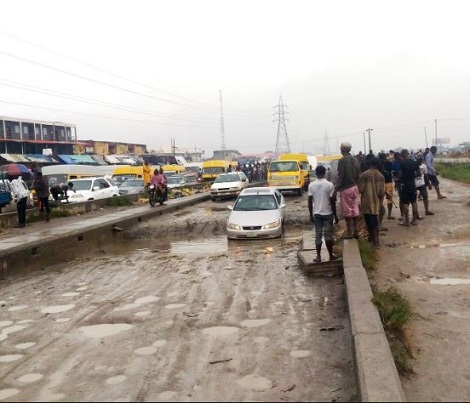 The flag off of the much awaited 60 kilometer road from Eric Moore to Badagry according to the Deputy Governor, Dr Obafemi Hamzat will block the gap of neglect and hardship suffered daily by residents living in that part of the metropolis, where traffic snarl, robbery and deaths have become a daily experience.

Hamzat represented the state governor at the event.

He said the contractor; Chinese Civil Engineering Construction Company (CCECC) was recalled to site to commence immediate work to bring relief to millions of Lagosians who live on the axis considered as an international route.

The Deputy Governor said a section of the expressway from Agboju, a suburb of Lagos to Trade Fair complex will be completed before the end of the year while the other stretch to Badagry will be rehabilitated with palliative measures to make it motor able to the public.

Hamzat  relieved the cooperation that exist between the Federal and Lagos State government noting that Federal Road Emergency Maintenance Agency ( FERMA)  was currently rehabilitating the Igboelerin section, to Agbara road while Federal Ministry of Works  was building a six -lane road from Agbara to Seme Border.

He said the government was committed to the welfare of the citizens but harped on the need for the citizens to be reciprocal to government’s good intentions. He criticized the frequent cases of traffic offences by motorist who drive against traffic warning that full weight of the law will be brought upon offenders.

The obviously enraged Hamzat who ordered that three vehicles be impounded said, ‘’As we were coming from this road this morning we saw vehicles facing one way in the process we stopped some of them we turned them back and some of them we said officers of the Lagos State Traffic Management Authority (LASTMA) to go and prosecute them.

He said: “Now a lot of our citizens on the roads were giving excuses that ‘there is no road that is why we have to face one way’. Unfortunately, on that same road we saw a young man that was hit by commercial motorcyclist also known as ‘Okada’ while taking one way. So that young man can be anybody’s brother, somebody’s cousin, somebody’s father. So we cannot say because the road is not in good shape and they will now break the law.’’

It will be recalled that the state currently came out with a new traffic law that driving against traffic attracts impounding of the vehicle.

Harping on the road construction, Hamzat accompanied by top government officials said, on “June 2nd, just two days after our inauguration the governor Mr. Babajide Sanwo-Olu and myself have been here and I am here again to show Lagosians that this is a very critical road for us and that construction will start again on this road and that is why we are here today to fulfil that promise.

“As you recall it is a massive road, we are expanding 4 to 10 lanes, it is a 60 kilometer road from Bode Thomas all the way to Okokomaiko that is what we are doing and the essence is to say that we will again start all over. From Agboju to trade fair that road will be completed this year. That is from the 4 lanes to 10 lanes. The palliative measures will start from the Trade Fair all the way to Okokomaiko to make it motorable for our people.

“It is important to stress the cooperation between the Lagos State Government and Federal Government of Nigeria. Today FERMA has awarded the rehabilitation from Igboelerin to Agbara. That rehabilitation will maintain the four lanes, the reason is clear because on that axis you have pipelines and various infrastructure we want to make sure that it is preserved. That will make it motorable for Lagosians”.

Speaking at the event, China Civil Engineering Construction Company (CCECC) General Manger, Lagos Head office, Mr. Bill Bian hailed the governor for bringing them back to site and pledged their preparedness to deliver on the timeline for the project.

He confirmed that the Agboju-Trade fair stretch will be completed before the year end while palliative measures will continue beyond the road.

Bian stated that his organisation was not unmindful of the suffering of motorists on a daily basis and thanked every agency of government that has helped them in one way or the other.