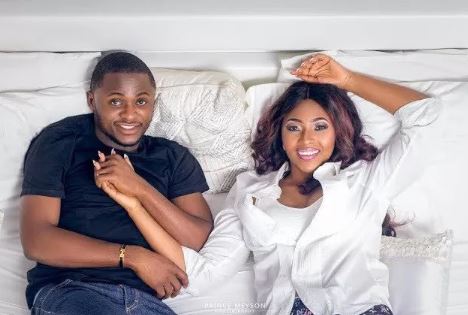 Ubi Franklin and Lilian Usoro
Following reports that a judge denied Actress Lillian Esoro and music executive, Ubi Franklin a divorce, many people are of the opinion that the two former lovers might reconcile.
Recall that tthe judge was said to have admonished both parties to settle their differences amicably, stressing that they were seeking divorce due to childishness.
The marriage of the celebrity couple, who tied the knot in 2015, hit the rocks in October, 2016. The news had hit the media after the couple was not spotted at important public events together.
It was gathered that the court had allegedly thrown out their divorce case based on the testimony given by the actress.
Esoro had allegedly testified that her estranged husband provides for their child, Jayden, and they are still very good friends.
The court ordered the couple to go and settle their difference amicably. The court stated that they are seeking a divorce based on childishness.
Reasons have now been given why the couple may never come back together.
According to Stella Dimoko Korkus sources:
”She tell them say make Dem go settle their differences say nah small pikin dey worry Dem.
Stella nah so Judge take cancel the divorce ooh and everybody inside court room burst into laughter oh”
But can Lillian Esoro move in again with Ubi, who is now a serial babydaddy?
After his separation from Lillian, Ubi was rumoured to have impregnated one of his staff, Nicola Siyo who later gave birth to a baby. He has a girl, Zaneta from a US-based woman. There is another baby from Lillian and a babymama, Sandra Iheuwa who has been humiliating him on social media.
Meanwhile, he has been alleged to be the father of former Big Brother Nigeria’s star Tboss Idowu’s pregnancy!
“Lillian, who has repeatedly kept quiet on why she left Ubi, can never marry him again. Already, she is free now as a single parent and has been dating some men in Abuja and Lagos, she cannot lose that freedom and come back to a serial babydaddy like Ubi. Ubi’s life is full of complexities now and any woman he marries has many other women to contend with their son
Though many are saying Lillian can still marry him because of her son, not a few are of the opinion that Lillian’s illicit affairs before and after she left Ubi’s home would also cause brouhaha for the couple. Its better they stay apart,” a source close to the couple told Kemi Ashefon.
Top Stories