The star-less kits make this writer wonder if the Amaju Pinnick-led NFF is really abreast of the trends in football on- and off-field matters. 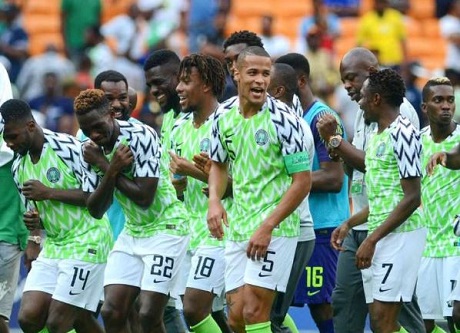 At major football tournaments, it’s now a fad to see former champions have star(s) embossed on their kits. The number of stars you see on a team’s jerseys denotes the number of times the team has won the tourney. These stars sit atop the team’s association crest.
At the ongoing African Cup of Nations (AFCON) in the land of the Great Pyramid, the Pharaohs of Egypt took to the field wearing strips decorated with seven stars on their shirts. The Indomitable Lions of Cameroon’s jerseys had five stars, the Elephants of Ivory Coast and the Leopards of DR Congo’s jerseys bore two stars, while Les Fennecs of Algeria, the Atlas Lions Morocco and the Carthage Eagles of Tunisia’s kits had one star each – all signifying the number of times the teams have triumphed at the biggest football tournament on the continent. These former champions have Puma, Le Coq Sportif, Addidas, O’Neills and Kappa as their kit suppliers.
The off-the-shelf green and white chevron (or is it ankara?) match ranges Nike provided the Super Eagles leaves much to be desired. This writer calls them off-the-shelf because they aren’t different from the ones you see display clothing store in Lagos or Aba. The kits don’t reckon with our place in the history of the AFCON and are an insult to our football identity and achievements. For goodness sake, Super Eagles are three times African champions but their jerseys in Egypt don’t reflect their previous feats. This omission is a shame on Nike. It also an indictment on the officials of the Nigerian Football Federation (NFF) who didn’t see it necessary to have stars embossed on the Super Eagles’ strips. The star-less kits make this writer wonder if the Amaju Pinnick-led NFF is really abreast of the trends in football on- and off-field matters. This writer shouldn’t wonder “anything” because the NFF doesn’t care about the pitch the Eagles train or play in Nigeria. The officials aren’t ashamed to see the national teams play their home games on surfaces herdsmen lead their cattle to graze.
Nike is also the kit supplier for the national football teams of England, the USA, South Korea, Norway, Brazil, Qatar, Poland and France. The quality of the strips the company provides these countries is far better than ours. Brazil, South Korea, England and Poland will never play a friendly or a qualifying match without having their players’ names embossed on their jerseys. It’s only at a tournament that you see the Super Eagles have their names on theirs.
Jill Ellis girls at the just concluded Fifa Women’s World Cup France 2019 had three stars atop U.S. Soccer crest on their strips. Likewise, the Norway women at the same tournament had a star stamped on their jerseys.  Though the Uefa League of Nations isn’t a FIFA tournament, the Three Lions still had a star – symbolizing England’s 1966 World Cup triumph – on their immaculate white jerseys at the League’s finals in Portugal last month.
Perhaps Nike exempts African teams from having their achievement stars on their strips. The other team the kit supplier sponsored at the AFCON, the Bafana Bafana of South Africa – who are one-time AFCON champions – didn’t have a star atop the SAFA crest on their shirts either.
The Barea’s kits at the AFCON, which were supplied by Garman, were unique in their features. In the five games the Madagascans played, they had the fixture details (for example, Madagascar – Nigeria, 30 June 2019) printed on the front of their strips. What stops Nike – or what stops the department in charge of kits at the NFF to prevail on Nike – to put such features on the Super Eagles’ jerseys? All these don’t matter in Nigeria, where we have been unlucky to have inept football administrators over the years, where we are cursed with officials who celebrate artificial pitches.
In 1991, the Super Eagles played the first half of an AFCON qualifying match against the Stallions of Burkina Faso with baggy shorts because the then Nigerian Football Association (NFA) couldn’t provide them kits. This was at a time the Glass House, the NFA headquarters, was in Surulere. In October 2004, this writer was at Lekan Salami stadium for Samson Siasia’s Flying Eagles’ U’20 AFCON qualifying match against Mali. In the said match, Solomon Okoronkwo donned a green strip different in design from that of the nine other outfield players. This shows our football administrators penchant for awfulness, their carefree attitudes to getting even little things done right.
It is time the NFF employed professionals to collaborate with Nike – or any other future kit supplier – to design kits for the national teams. It is time the NFF prevailed on Nike to give our national teams’ jerseys additional features in the manner the kit manufacturer offers England and the like. Our football administrators must maximise the contracts they sign with all their sponsors. Nigeria, too, deserves the best.

Olusola Akinwale is a football historian and an award-winning writer. He can be tracked on Twitter @olusolaakinwale.
Top Stories