A promising Nigerian woman has had her life cut short after she slumped and died at a party. 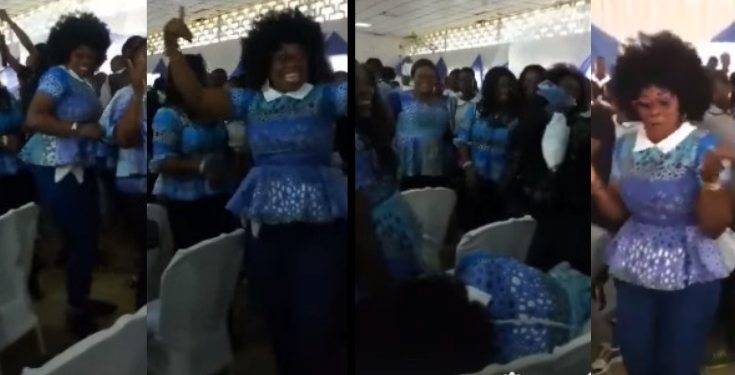 Osarugue Eunice
There was serious panic at the St Maria Goretti Reunion Party in Edo State last Friday July 12th when journalist, Osarugue Eunice, who was at the school’s 60th anniversary party, slumped and died while dancing.
According to reports, Eunice was said to be life of the party as she was proudly showing off her dance moves whe she suddenly slumped on a chair and was thought to be taking a rest.
However after some minutes, people around her noticed she was not moving nor responding to her name when she was called upon.
A doctor was called and she was rushed to the hospital where she was certified dead on arrival. Facebook user, Uwuma Vincentmba, gave an account of what happened.
Read below:
"She was said to have been dancing in the school hall then slumped on a chair. Was presumed to be tired but when she did not respond, Doctors were alerted and checked her. No peripheral pulses were palpated. Mis information about her being an asthmatic made the doctors administer pufffs of salbutamol to her via inhaler. When alerted, (smagoga doctors) we met her lying on the ground outside the hall. We stopped the inhaler, could only palpate the left temporal pulse and continued anti shock management and CPR. Then rushed her to the nearest private medical centre opposite the school but they had no oxygen.
Moved her to Central hospital in the hope of getting full complement of resuscitation facilities viz oxygen, defribillator. Upon arrival at central hospital, she was pronounced BID ( brought in dead). No defribillator. We continued administering CPR on the way to UBTH, in expectation of getting a defribillator. Although a team was at reception to receive her, they confirmed no cardiac activity and also confirmed as bid. Her corpse was then transferred to Stella Obasanjo Hospital and Morgue.
*Additional history from relative* She was a known hypertensive, was ill 3months ago, collapsed after an injection administration and was in a coma for one week. Also had severe headaches two weeks ago and lapsed into unconsciousness for 24hours. Her attending Doctor had advised her to do some comprehensive check up and investigations which she postponed. She had severe headache prior to the opening ceremony of the 60th school anniversary.
Diagnosis: *Tentative cause of death is Cardiorespiratory arrest secondary to hemorrhagic stroke/ ruptured aneurysm*.
[7/12, 5:33 PM] Dr Uyi Usoro: *Lessons learnt*
*Regular medical check ups.
*Don’t ignore warning signs, subsequent attacks of strokes almost always fatal.
*Proper ventilation while decorating the hall.
*Ambulance for every AGM ceremony.
*CPR training.
*Medical outreach should not be combined with other activities.
*Also food and drinks should be available to avoid hypoglycemic attacks."
Watch videos of her dancing at the party below:
Top Stories