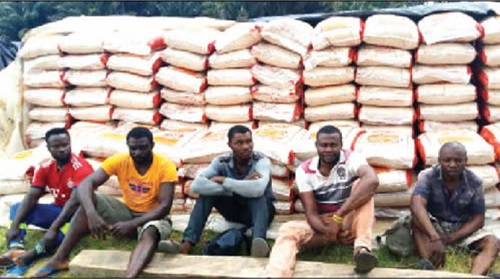 Some of the rice smugglers

Operatives of the Nigerian Navy, Forward Operating Base, Ibaka, in the Mbo Local Government Area of Akwa Ibom State, have arrested 11 suspects and seized 483 bags of smuggled rice from them.

It was gathered that the suspects were apprehended on the same day in two separate operations, while smuggling rice from Cameroon into the country.

The Commanding Officer, FOB, Captain Toritseju Vincent, said this while handling over the suspects and the seized items to the Nigeria Customs Service in Ibaka.

Vincent, who noted that there had been drastic reduction in smuggling, gave an assurance that the Nigerian Navy would not relent until smuggling on the waterways was completely eradicated.

He said, “The Forward Operating Base, Ibaka, on July 10 arrested a wooden boat with five suspects, who were suspected to be illegally smuggling 319 bags of rice from Cameroon. A wooden boat was also impounded with six suspects and 164 bags of rice.

“Like we have always been doing, we will continue to solicit your assistance and cooperation in our fight against illegalities. In the past months, there has been a drastic reduction in the rice trade between Cameroon and Akwa Ibom State.

“This is largely due to our efforts on the waterways. We will continue to intensify our patrols to nip this completely in the bud.

The Assistant Controller, NCS, Ali Garko, while receiving the items and the suspects, thanked the Nigerian Navy for the collaboration and urged it to continue in that direction in order to nip smuggling in the bud.
Top Stories