The President's spokesman, however, said it was wrong for Sesay to have said the government did not know who to negotiate with since Boko Haram had split into different factions. 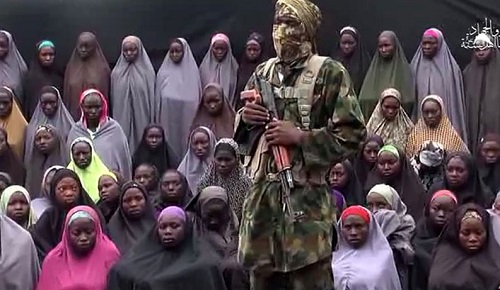 The Presidency says it is still negotiating with Boko Haram terrorists for the release of the abducted Chibok school girls, Leah Sharibu and other kidnapped Nigerians.

It faulted a former CNN anchor, Isha Sesay, for saying in her newly published book that Nigerians and the government had forgotten the kidnapped girls because they were from poor homes.

The Senior Special Assistant to the President on Media and Publicity, Garba Shehu, in a statement on Monday,  said Sesay’s new book titled, ‘Beneath the Tamarind Tree,’ was laced with many untruths.

Shehu noted that in the introduction of the book, the author acknowledged the release from Boko Haram captivity of more than 50 percent of the girls under the Muhammadu Buhari administration but said “ very rightfully, that “we must not forget the 112 who are still missing.”

The President’s spokesman, however, said it was wrong for Sesay to have said the government did not know who to negotiate with since Boko Haram had split into different factions.

The statement read in part, “This is a misrepresentation of the position of the government. When the government spoke on the issue, it was clear that although this split had the effect of making negotiation and reaching an agreement a more difficult talk, this country and our international partners are still engaging  through third parties with the terrorists.”

He said while it was true that the government had no information on where the captives were held, it was equally incorrect to say the government had given up on the Chibok girls “when the truth is that there was nothing on the ground to give that impression.”

The statement said further, “This book asserts that the government and people of Nigeria no longer cared about the girls because ‘they are poor…they don’t have famous names; people just don’t care.’ No. Nigerians care and that is why the #BringBackOurGirls movement was able to generate the groundswell of public opinion.”

He argued the administration of former President Goodluck Jonathan failed to acknowledge the abduction of the girls until much later but said it would be unfair to ascribe some of the inefficiencies of the last government to Buhari’s own.
Top Stories