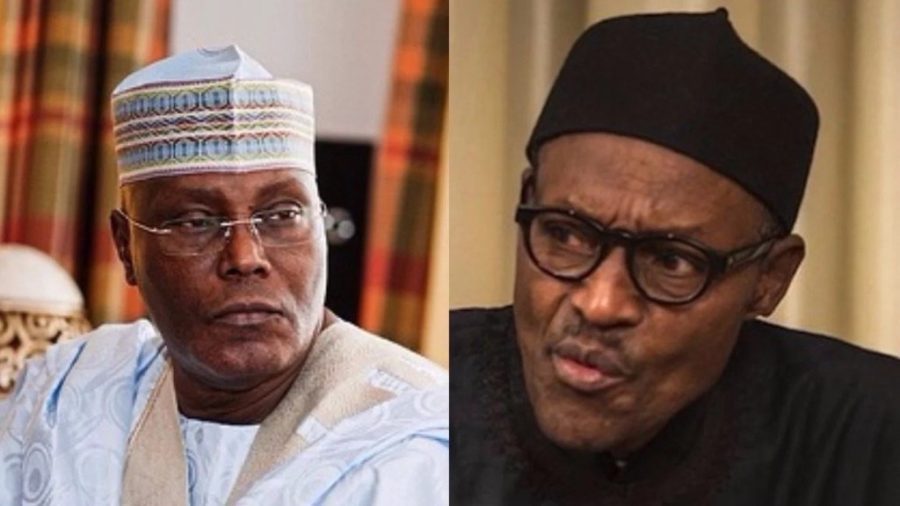 Atiku and Buhari
President Muhammadu Buhari’s legal team has played a video clip at the Tuesday’s hearing of the Presidential Election Petition Tribunal showing the Chairman of the Independent National Electoral Commission, Prof. Mahmood Yakubu, expressing fear about the possibility of deploying electronic transmission of results for the 2019 general elections.

Yakubu, appeared in the clip in a”one-on-one interview with INEC Chairman” shown on Channels Television on February 6, 2019, citing the problems of communication, poor coverage of 2G, 3G, 4G networks in the country, let alone 5G that was yet to be available in Nigeria, and the issues of cybersecurity, as militating against the possibility of deployment of electronic transmission of results during the election.
INEC chairman was seen as saying in the clip that discussion with network providers was ongoing, but added, “We still need to do a lot more before we can use the technology of transmitting the results of election”.

Under cross-examination by Buhari’s lawyer, Dr. Alex Izinyon (SAN), the petitioners’ 40th witness, Segun Showunmi, through whom the petitioners tendered 48 VCDs, on Monday, confirmed that Channels TV‘s logo appeared on the three-minute-long clip.

He also confirmed that the person interviewed “looked like the INEC Chairman”.

He confirmed that he knew the interviewer, Seun Okinbaloye.

The petitioners, the Peoples Democratic Party and its presidential candidate, Alhaji Atiku Abubakar, opposed the admissibility of the VCD as an exhibit.

But the five-man tribunal led by Justice Mohammed Garba asked their lawyer, to reserve his objection till the final address stage.

The tribunal admitted the exhibit as P85 and the certificate of compliance accompanying it as Exhibit P86.

The petitioners who are challenging the victory of Buhari and his APC at the February 23, 2019 poll had shown four video clips where the INEC chairman had expressed hope that the results of the poll would be electronically transmitted.
Top Stories