The suspect who fled the village into neighbouring Jigawa State after the incident, has been nabbed by the Police. 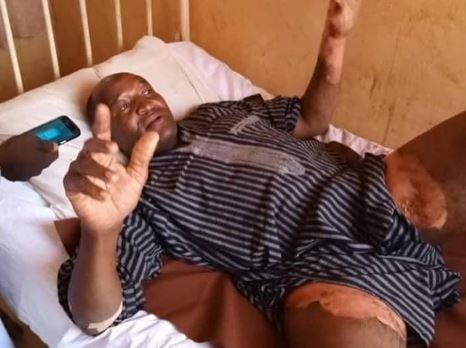 Husband whose wife bathed him with hot water

The Police Command in Kano State has confirmed the arrest of a housewife, Aisha Ali, who allegedly poured hot water on the private parts of her husband.

The command’s Public Relations Officer, DSP Abdullahi Haruna, confirmed the arrest of the suspect in a statement in Kano on Tuesday and said that the incident occurred at Feyen-Fayen village in Danbatta Local Government Area.

Haruna said the Command received a report on Sunday from the Village Head of the community that 35-year-old Aisha poured hot water on the lap and private part of her husband in their home on Friday.

“The husband suffered severe burns in his private parts and surroundings. He is presently admitted at Danbatta General Hospital, receiving medical care and is responding to treatment,’’ he said.

He said that after the incident, the suspect fled the village into neighbouring Jigawa State.

Haruna said that on receipt of the report, the Police responded promptly by raising a team of Operation Puff Adder, which tracked and arrested the suspect at her hideout at Babura in Jigawa.

He said that preliminary investigation revealed that she committed the act because her husband was planning to marry a second wife.

According to him, the commissioner of police in the state has ordered that the case be transferred to the State Criminal Intelligence and Investigation Department for discreet investigation.

The spokesman said that the suspect would be arraigned as soon as the investigation is completed.

“The Command is using this medium to call on law-abiding citizens of the state to always report any incident to the nearest Police station without delay.

“This will assist in immediate arrest, investigation and diligent prosecution of the culprit,” he said.