Nigeria's oldest living war veteran has talked about his life, revealing that he is still strong in bed at 101 years old. 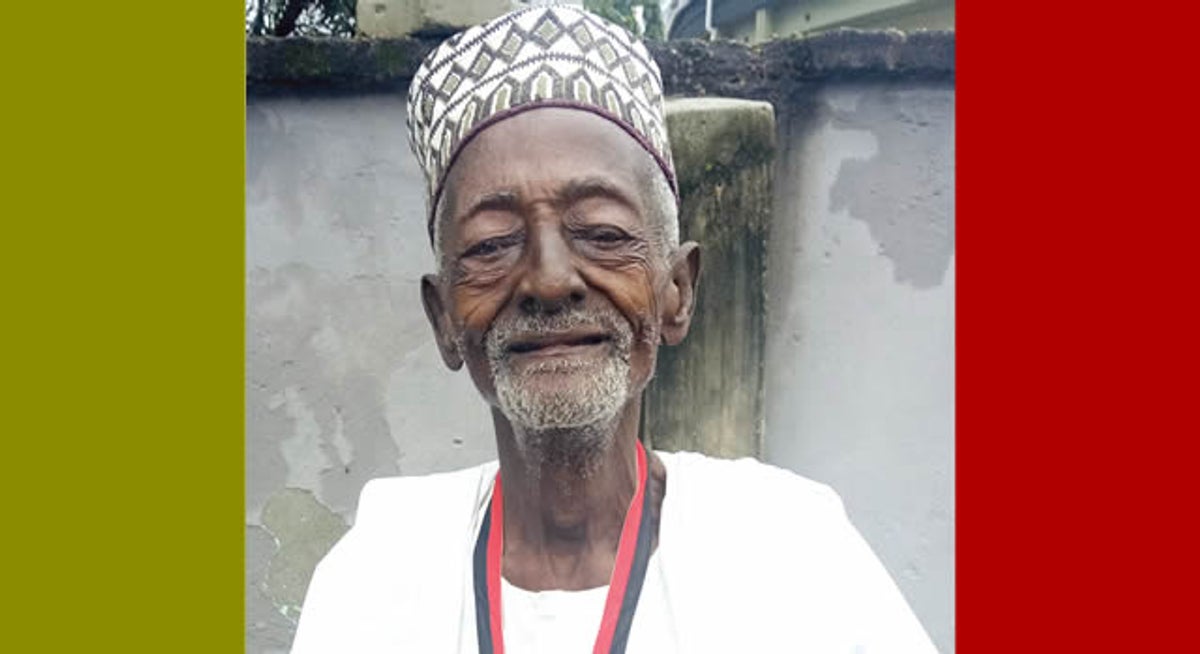 Pa Adama Aduku
Walking as fast as his legs could carry him without any form of support as he approached some plastic chairs stationed at a strategic corner within the expansive compound that wet Tuesday afternoon, Pa Adama Aduku showed no sign of tiredness or frailty. Donning a white attire synonymous with the people of northern Nigeria complemented by a specially designed footwear and cap, there was nothing to suggest that at 101, the old man had lost any bit of the confidence and swagger that served him during his days in the military and over the years. He was full of energy.

Finding comfort in one of the plastic chairs around, the centenarian rolled back the years in grand style, reeling out highlights upon highlights of his over one century on earth. Born to a peasant farmer with two wives in 1918 in the rural town of Abejukolo-Ife under Omaha Local Government Area of Kogi State, Aduku had no idea how his life would pan out while treading the nooks and crannies of his ancestral land as a child. A family of traditionalists, education was never a priority in his lineage; instead, his formative years and those of other children were shaped by farming and the experiences that came with it. Life went on normally for him until one day in 1942 when everything changed.

“I was coming back from the farm one evening when I saw a man who was younger than me at the time beating our village head,” Aduku recalled with nostalgia as he shared his life’s story with our correspondent earlier in the week during an encounter. “The man named Salikawa was a soldier who resorted to beating up our chief for refusing to carry his bag and seeing him off to his house, which was 10 miles away.

“When the matter was reported to the District Officer, the chief was advised to obey the soldier in his own interest or face whatever consequences that resulted from that.

“I was very angry and bitter and I made up my mind to join the military so that I could go back to the village and also beat up Salikawa for humiliating our chief,” he added.

A few weeks after clocking 24, Aduku left his native Abejukolo-Ife and headed for Makurdi, Benue State, to enlist in the army. Beyond the desire to avenge the humiliation of their community head by a much younger fellow, the allure of being respected and feared by his kinsmen also sparked his interest in joining the military. But while he received the blessing of his father and a few family members, others within the household objected to the idea. However, that didn’t stop him from pursuing his goal.
Two years after joining the army in Makurdi, Aduku and others were moved to Eleyele in Ibadan, Oyo State, in preparation for Egypt en route India and Burma (now Myanmar), where they were to fight for the British Army in the Second World War. It is a time the centenarian looks back to today with fond memories.

“In the course of that journey, we ran out of drinking water, so we had to rely on the water from the sea to drink despite it being salty,” he revealed. “By the time we finally got to Egypt, we waited a bit before moving to Bombay in India and later to Kolkota also in that country for the war.

“While over there, we fought with Japan in an intense battle and we were able to defeat them. We also fought against enemies in Burma (now Myanmar).

While still trying to recover from the energy he lost in the war upon his return back home, Aduku faced another challenge from familiar quarters. Having heard horrible tales of women and children, who suddenly became widows and orphans, as a result of their husbands and fathers participating in the war, the retired soldier’s grandmother begged, cried and pressured him to leave the army. She was not the type that would struggle to get anything from him. He was in a fix. A decision had to be taken.

“I didn’t know what to do after my grandmother begged that I should leave the army,” the old man told our correspondent as he attempted to change his sitting position. “She loved me so much and was always willing to do everything to make me happy in life. I couldn’t afford to turn her down,” he stated.

So, a few weeks after returning to Nigeria from the Second World War and four years after joining the army, Aduku quit the military. Armed with £100 and other priced material possessions, the Kogi-born centenarian headed to Tinubu Square in Lagos Island to begin a new life as a trader. It was an adventure he eagerly looked forward to. But just before he could settle down and begin his new journey, something unexpected occurred – an event that changed more than a few things around him.

“The £100 I was paid for fighting in the Second World War was stolen in Lagos,” he recalled painfully. “I couldn’t sleep for several days; I was heartbroken and felt sickly.

“I had to fall back on the other things I had to get my life back on track even though it was tough and painful at the time.

“The following year, in 1947, I managed to marry a wife and was engaged in petty trading but I wasn’t satisfied. I wanted something more.

“So, I informed my wife of my decision to go back to the army. She didn’t express any kind of fear but only pleaded with me to wait until after she delivered the baby she was carrying in her womb before going back to the military.

“I agreed and waited till 1950 after she was delivered of the baby before going back to join the army,” he disclosed.

By the time Aduku finally returned to the military in 1950, his grandmother, who pressured him to quit the khaki for civilian attire four years earlier had long passed on. So, for the seven years that followed, the diminutive old man served in various capacities in the army, bringing his rich experience of the war to bare at almost every point. But by the time he was 39, the Kogi native finally decided to leave the barracks for a new life with his family.

“After leaving the army, my sister prevailed on me to come back to the village and invest in farming rather than going back to trading,” he said.

“God blessed me after leaving the military; my farm became huge and I had wealth.

“Since that period till now, I have been into farming and have many people working for me. I still go to the farm but only to supervise and pay my workers,” he disclosed proudly.

But beyond the posture of a tough individual presented by his military background, Aduku, unknown to many,  also has a soft and interesting side. For example, apart from being a loving husband and father to his two wives and 10 children, the centenarian is a great lover of tea – a drink he attributes his longevity and unusual strength to at 101. That is not all; the old man boasts that even at his age, he still possesses the energy and skills to make any woman happy in bed. According to him, there are many young women in his community that have continually made passes at him, willing for him to mesmerise them in bed.

“I may be 101 years old, but inside me, especially when it comes to making a woman happy in bed, I am still strong and fresh,” the war veteran, who was honoured by Vice-President Yemi Osinbajo, and the 81 Division of the Nigerian Army in Lagos, for being the country’s oldest living World War II veteran boasted. “In my family, a man’s manhood never dies, irrespective of his age.

“So, I still have the energy to make love to any woman.

“There are so many young ladies seeking my attention in the village. They have been calling and asking when I will return home.

“But as a devout Christian, I don’t give room for such despite all the disturbances from women,” he added.

Indeed, a fulfilled man in every sense, Aduku has tasted the good and sour sides of life. He told Saturday PUNCH that one of his greatest pains in life is that none of his children agreed to follow in his footsteps by joining the army. The veteran, who disclosed to our correspondent that he never got the chance to avenge the humiliation of his village chief by the soldier named Salikawa, said that if he had the chance to choose a career in life again, it would surely be the military as God had blessed him through the barracks.

“My children have all refused to join the military,” he said with a tinge of regret. “I have tried to persuade them several times but they refused. I cannot force them.

“Becoming a soldier was my biggest dream as a child because in those days they were highly respected.

“Through being a military man, God blessed me a lot. I have been offered traditional titles in my village several times because of my feats while in the military but I declined.
“God has blessed me in many different ways; I do not need anything more to be happy in life.

“At the time I joined the army, I never knew God could bring me this far through the profession.

“Everywhere I go, people honour and celebrate me. It is beyond my imagination. I am really grateful to God for making me witness this during my lifetime.

“That is why when I am gone to be with my creator, I would like to be remembered as a soldier who served his country with all his heart,” he said.

Indeed, Aduku’s 101-year sojourn on earth so far is the best fit for a Hollywood thriller. Apart from living his childhood dream and enjoying the grace of old age, he has watched his children and grandchildren prosper before his eyes. Celebrated by the government and all the people that come across him wherever he goes, the centenarian cannot ask for more. In spirit, soul and body – the retired soldier is accomplished.

“I cannot ask for anything else,” he said, almost breaking into tears. “On top of all the blessings I have received from God, He has also given me a long life to enjoy them. There is nothing more I can say than give Him thanks,” he added, before raising his hands to the ‘heavens’ – the sight of an old man thanking his creator for all that life has gifted him.
***
Source: Saturday Punch
Top Stories