Man Who Built His House With Proceeds From Robbery Operations, Makes Shocking Revelations


A man who claimed he built his house with proceeds from armed robbery operations, has made his confession. 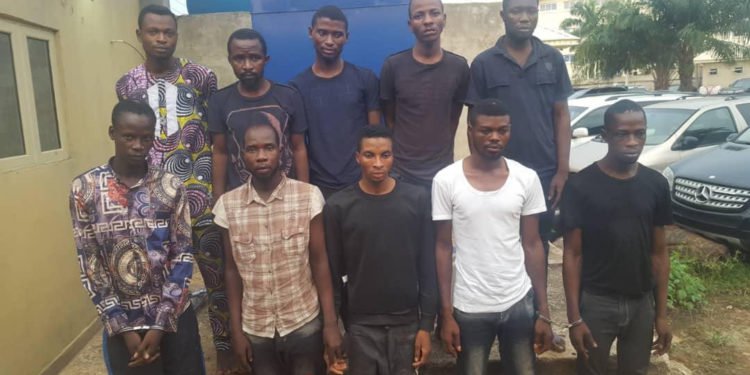 The suspects
According to a report by The Nation, a self-confessed  member of an alleged  notorious 10- man gang, Wahab Wasiu, says  he built a house with  proceeds  from  robbery operations.

Wasiu and his gang were arrested after allegedly robbing  an unnamed motorcycle dealer in Abule Egba, a Lagos suburb, of N2 million cash  and mobile phones in his shop.

They were picked up from different locations in Lagos and Ogun States.

The gang is also said to specialize in robbing people who made large withdrawals at Automated Teller Machine (ATM) centres in different parts of Lagos.

The modus operandi is that a member of the gang would visit a bank on his motorbike to monitor customers withdrawing  huge sums of money, and alert  other members who would then trail such customers and dispossess them of their money.

Wasiu, 28, claims to be an aluminium technician.

He said he took to armed robbery in 2017 after he was lured by one of his friends he named as Tunde.

“There was a day he asked me to go to the First Bank at Idimu and stand beside an ATM machine and   monitor people  withdrawing  huge amounts of money,” he said.

He added: “Whenever I have a target, I would call my motorcycle operator known as Akeem Hassan and we would trail the person. Tunde would later join us and we would rob the person of his money.”

He said he had participated in robbing no fewer than eight people who had gone to make withdrawals from ATMs.

“So far, I have trailed over  eight bank customers of  at Ayobo, Egbeda and  Ijegun.  I built a house with the money I made from robbery operations.”

Another member of the gang, Ogunbiyi, alias Ogufe, from Iba in Ojo Local Government, told his interrogators that he lavished his own  share  of  the  proceeds  from the Abule Egba robbery on burying his father.

According to his own narration, he trained as a mechanic, joined the Road Transport Employers Association of Nigeria and was arrested  when  ”I went to fight for (the control of) a motor park at Alaba international market.”

After spending one year at Kirikiri Prison, he was granted bail and went home.

He claimed to have joined the Eiye confraternity  in 2010.

He said: “After I was released from prison, I started looking for job and I couldn’t get any. I met one Tunde at a popular hotel in my area.

“Tunde  is boyfriend to a girl in my area and he told me that he had a gun and was looking for connection to go for any robbery operation.

”Three weeks after we met, Tunde said he had a robbery operation that he would want me to participate in.  I met him at Egbeda and we came with a motorbike that was operated by one Semo.

“We went to Idimu and robbed a man who was walking along the road and we took the sum of N250,000 from the man.

“Tunde had someone who gave him information about the man with the money and I got N70,000 as my share and he left with the rest of the money.

“One month later, three of my friends told me they had information that an Igbo trader that deals in  motorbikes  was making huge sales daily and they wanted me to lead them to rob the man.

“I told them that I had no gun for the operation but they persuaded me to use my contacts to get a gun. I told Tunde about the operation and he brought his guns and we all went and robbed the man and took away N2 milion from the man. I got N230,000 as my share, Tunde got N240,000 and we gave the remaining to the informants to share.

“I went and buried my father with my own share of the money and I bought some cloths with the remaining money but before I knew it the police swooped on me and arrested me.”

Olarinwajo, a 24 year old motorcycle operator said he became an armed robber through the influence of his friend Egufe.

Olarinwajo who goes by the nickname  Starboy, said: “my first operation was at Liasu Road , Idimu and  I was the one that operated the motorcycle.

“There was this   guy called Eni who was inside the bank and he monitored the man we robbed inside the bank. I don’t know the amount they collected from the man but I was given N30,000.

”The second operation was at Aboru,  Iyana Ipaja and it was my friend Sadiq Alabi that brought the job for us and I also operated one of the motorbikes we used for that operation. That day, we robbed the man selling motorcycles of N2million and I got N70,000 as my share.  I was the first suspect that was arrested by the police.”

“It was my friend, Starboy that brought the idea that I should rob the man and he was the person that organized the whole operation. I was given N70, 000 after the robbery; I sincerely regret   getting myself involved in this mess.”

In his confession, Raza Isah 31, said “I  have gone for three robbery operations and I  was the person carrying Tunde on my bike and Tunde used to give me N40,000 after each operation.”

Hassan, 28, a native of Oshogbo, Osun State, who is also a commercial motorcycle operator said: “It was Eni-money that got me involved in armed robbery. I have gone out for five robbery operations with him and he used to pay me between N30,000 and N40,000 per  operation”.

Koyum, 29, who hails from Ikire area of Osun State said: “I am a motorcycle operator. It was my friend called ‘Lastborn’ that lured me into robbery. We have robbed a bank customer at Aguda area of Lagos and collected money from a man. I was  given  a sum of N25,000  during my first operation.

“In the  second operation, we robbed a man who came  out  of a branch of Zenith Bank in Apapa and I  got N25,000 as my share. Tunde who is my friend slept with my wife after he was released from prison.”

Olagoke, 37, described himself as a former  armed robber.

He said he was arrested by  men of the Special Anti-Robbery Squad, Ikeja  ”and I have stopped being an armed robber.”

He said: “I have robbed over three bank customers.  But I was arrested after  my last operation and I gave up armed robbery and joined a transport union.

“It was Tunde that gave me the motorcycle and we were using it to work for the  union because we heard that some people wanted to attack the union”.
Top Stories