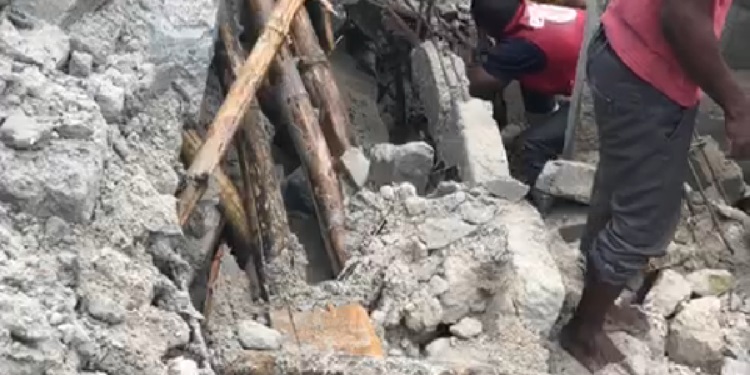 Scene of the incident (Photo: TheNation)
At least four persons were feared dead with an unspecified number of persons still suspected to be trapped under a building that collapsed this morning in Abraka, Ethiope East council area of Delta state, according to a report by TheNation.
The building, a yet-to-be completed structure, identified as the new 206 Hotel, is located along Aghwana Avenue in Abraka. It was gathered that the owner of the building had taken to his heels.
Although the cause of the cause of the incident could not be immediately ascertained, it was gathered that it had been raining in Abraka since Friday evening. It was also gathered that the casualties caught under the structure when it crashed were some of construction workers who arrived early for work.
“The new 206 Hotel under construction at Aghwana Avenue, Abraka , this morning collapsed after today’s heavy downpour. Four construction workers who had arrived early for the day’s job were  trapped and later confirmed dead. Rescue efforts are still ongoing to see there are others trapped to be rescued.
From what I gathered, the building fell between 5:30am and 6:00am and it could have been because of the heavy rains since yesterday. It is still under construction so any other reason could have still been responsible for the accident”, the source, a resident of Abraka, who gave his name as O’tega said.
When reached for confirmation and details, the Police Public Relations Officer (PPRO), DSP Onome Onowakpoyeya, said there had been a building collapse, but said that the police command had not been informed of any death record.
“It is true there has been a building, a hotel still under construction. We have no record of death because from what we know for now, it is still under construction,” she said. 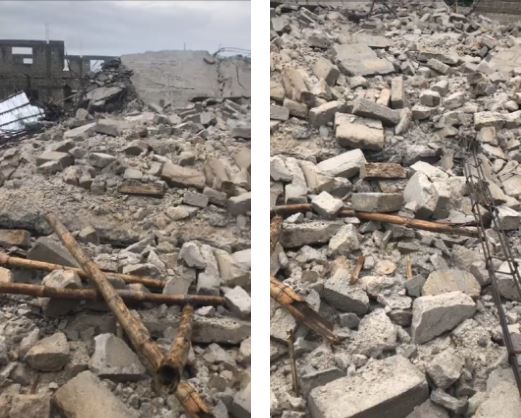