Adekanmbi, who works as a scaffold artisan, said he reported the matter to the human resources personnel of his company, adding that he had to run a series of tests on his eyes. 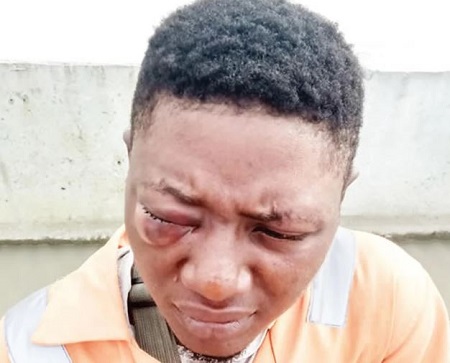 It was gathered that there was an altercation between some soldiers, who were deployed in the project site, and the workers.

Adekanmbi was reportedly not at work when the dispute arose.

Following the altercation, one of the soldiers decided to assault the 28-year-old for his colleagues’ offences.

The victim said his attempts to explain that he was not involved in the dispute fell on deaf ears.

The Ogun State indigene said, “I work with an Indian company called Onshore Construction LLC. It has a camp inside the Dangote fertilizer and oil refinery project site at the Lekki Free Trade Zone.

“On Wednesday, July 17, 2019, I learnt that there was an issue between the workers and the soldiers guarding the plant, which led to the soldiers beating up one of the workers. In the process of beating him, his fellow workers protested and reportedly threw stones; one of the soldiers was hit by a stone. I was not around because I left for home early; it was while home that my colleagues informed me about the development.

“The following day, we were in a single queue to enter our worksite and one of the soldiers said we should split into two lines to make it move faster. Two other guys and I formed a second line. On our way in, another soldier stopped the three of us and said we should sit on the floor. I was trying to explain to him that it was one of his colleagues who told us to be in the queue, but he said he did not want to hear anything.

“While we were still on that, when the soldier who assaulted me started shouting that we were the ones who stoned him the previous day. I was still explaining to him that I was not there when he started beating me with the whip he had on him. One of his colleagues joined him and started kicking, punching and hitting me with his rifle.

“After beating me, the first soldier said I should sit on the floor. When he saw blood dripping from my nose, he asked for my company identity card, which I showed him. When he saw that I am Yoruba, he then spoke to me in Yoruba language that I should not be angry that it was what my colleagues did to him the previous day that made him react that way.”

Adekanmbi, who works as a scaffold artisan, said he reported the matter to the human resources personnel of his company, adding that he had to run a series of tests on his eyes.

He said, “I did not realise that the injury was severe until I got in and people called my attention to my eyes. I immediately went to report to my supervisor and he took me to the HR people, who promised to make a report against the soldiers and forward it to Dangote.

“I went to hospital to see a doctor. A series of tests were conducted on my eyes and some drugs and drips were recommended for me to buy. Though the pain has subsided, the pupils are still red and swollen. I have to move around with a pair of dark goggles. The doctor told me to come back in a week’s time for further check-up.

“The name tags on the soldiers’ uniform have been removed. They have a camp inside the worksite but we learnt that they were deployed there from the Dodan Barracks, Obalende.”

When the spokesman of the 81 Division, Olaolu Daudu, was contacted, he asked the victim to come and see him.

“Let the person come so that we can look into the complaint,” Daudu simply said.
Top Stories

Court Stops Police From Arresting Former Minister, Kenneth Gbagi After He Allegedly Ordered His Staff To Be Stripped