The APC Senator said he approached the Federal High Court as a law abiding citizen and obtained a judgement instructing INEC to release his certificate of return. 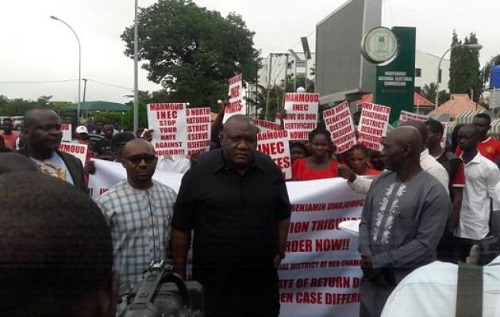 The Senator-elect representing Imo North district, Senator Benjamin Uwajumogu on Monday staged a protest to the headquarters of the Independent National Electoral Commission (INEC) demanding the immediate release of his certificate of return being withheld by the Commission.

Uwajumogu had secured an order of a Federal High Court sitting in Abuja directing the Commission to release the certificate of return, but three weeks after the judgement, INEC was yet to comply with the judgement.

INEC had refused to give the Senator his certificate of return on the excuse that he was wrongly declared winner of the election, saying it has set up a committee to investigate the veracity or otherwise of claims of misconduct during the election, a decision he challenged in Court.

Director General of Benjamin Uwajumogu campaign organisation, Matthew Omegara said during the protest that INEC should be held responsible for any break down of law and order in the area, giving the commission 24 hours to release the certificate of return.

Speaking to newsmen at the INEC office, the APC Senator said he approached the Federal High Court as a law abiding citizen and obtained a judgement instructing INEC to release his certificate of return, adding that till date, INEC was yet to obey the judgement.

He alleged that there were people in the opposition with INEC to frustrate him, adding that when other people, including members of the opposition obtained judgement, INEC did not waste tie in releasing their certificate, saying “why is my own different. Why is INEC looking for excuses to deny us our certificate of return when a court of competent jurisdiction has given an order.