A pair of twin babies were found dead in the back of a car after their father allegedly forgot they were there. 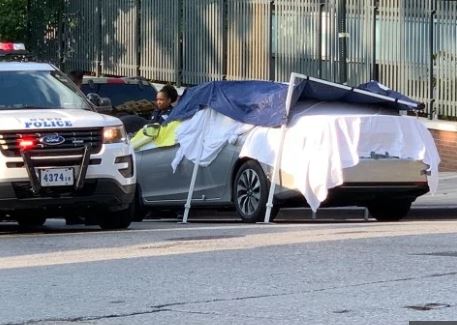 Scene of the incident
Twin babies were yesterday found dead in the backseat of a car after their dad allegedly left them inside for eight hours in New York’s 30C heat.

The tragic pair were said to be foaming at the mouth when they were discovered in the vehicle.

Juan Rodriguez, said to be their father, has been charged with two counts of manslaughter and criminally negligent homicide after the deaths of one-year-old Mariza and Phoenix.

The 39-year-old is alleged to have parked his Honda Accord in The Bronx around 8am before work.

After finishing his shift at the Veterans Association hospital is said to have come back at 4pm, before realising that the children were on the backseat.

The New York Post reports they were dead and "foaming at the mouth", and Rodriguez began screaming.

After a bystander is said to have called 911, he was arrested and charges brought against him this morning.

The temperature in the city yesterday was around 30C, with temperatures inside the car thought to be far hotter.

Crowds of stunned people gathered to watch police at the cordoned off scene.

The family had just celebrated the twins' first birthday with a big party, a neighbour said.
Top Stories