The electoral umpire declared Buhari of the All Progressives Congress (APC), as the winner. 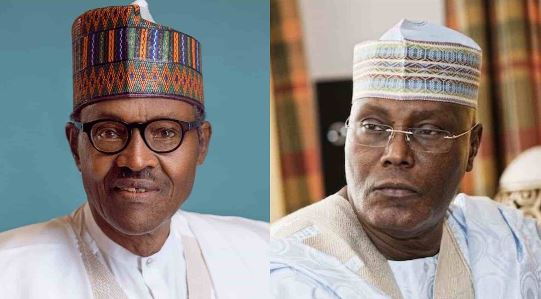 President Muhammadu Buhari and Atiku Abubakar
The Independent National Electoral Commission, INEC, will commence defence of President Muhammadu Buhari’s victory in the 2019 presidential election today, Monday.
INEC will open its defence in the petition filed by the Peoples Democratic Party, PDP, and its presidential candidate, Atiku Abubakar, against the conduct of the February 23, 2019, election.
The electoral umpire declared Buhari of the All Progressives Congress (APC), as the winner.
INEC will in the next six days defend the allegations contained in PDP and Atiku’s petition where 62 witnesses gave evidence against the credibility of the election.
Atiku and PDP had closed their case at the Justice Mohammed Garba led five-man Presidential Election Petition Tribunal in Abuja.
The tribunal had adjourned till July 29 for the first respondent, INEC, to open its defence.
One of the major issues that will dominate the tribunal session is the controversy generated by the existence and usage of a server by INEC.
Atiku and PDP are contending that the result of the election was downloaded into INEC server, while both the INEC, Buhari and APC vehemently denied the claim.
Top Stories