Tenant Kills Landlord, Steals His Car After Being 'Ordered By A Spirit' (Photo)


A tenant who reportedly murdered his landlord has confessed why he did it after his arrest in Lagos. 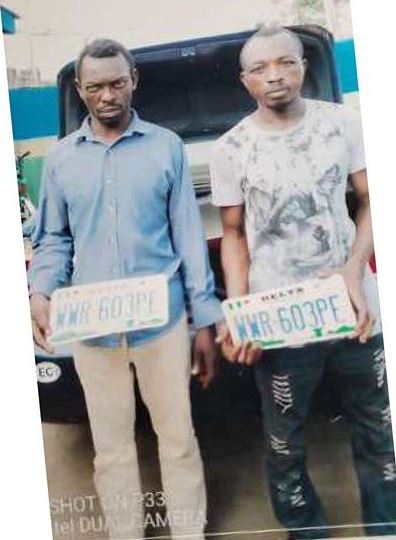 The suspects
A 38-year-old man, Daniel Isaac, who was arrested by the Police in Lagos, yesterday, has given gory account of how he strangled his landlord to death in Ijegun.
The suspect claimed that a strange spirit came over him and he pounced on his 50-yr-old landlord, Don Able. He later threw his body into an open septic tank in their compound.
Isaac and an accomplice, Emmanuel Chukwu, 36, were arrested by the police on “stop and search” at Iba, while they were taking the landlord's car to a buyer.
According to the suspect: "When I held him, we struggled but I overpowered him because that bad spirit in me is very strong. It makes me very powerful. The spirit use to tell me to take my life.
It also makes me feel like taking my life. Once, it asked me to set myself on fire and throw myself into the open septic tank inside the compound. It started tormenting me in my village when I was 14 years.
It has defied every cure. Sometimes, it will turn me into a madman. Its a black, strong, huge figure and it makes fire come from my eyes when it comes upon me. It usually torments me early in the morning or when the sun is at its peak.”
Top Stories