Boko Haram Kills Many In Jakana In Fresh Borno Attack 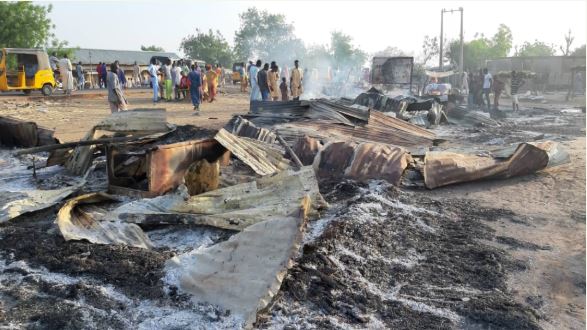 File Photo
Many villagers were believed to have been killed in an attack by Boko Haram insurgents on Jakana in Konduga Local Government Area of Borno State last night, sources within the civilian joint task force said.
The incident was said to have occurred at 6.30pm along the Maiduguri- Kano Road. The insurgents, who drove in six gun trucks, were reportedly shooting sporadically.
The attackers were also said to have carted away foodstuffs. Sources alleged that there was no military and police presence in the village at the time the terrorists struck, saying troops and policemen had withdrawn from the village two days earlier.
A resident, Babagana Adam, told a correspondent that the insurgents arrived at the village in six military utility vehicles mounted with anti-aircraft guns. “We thought the troops had returned because they have everything similar with soldiers until when they started shouting ‘Allah Alkar’, then everyone fled the town, they operated freely, they were breaking shops, looting and carting away foodstuffs. “I don’t know how many people have lost their lives, but definitely, many might have died due to how they (the terrorists) were shooting.
As I am speaking with you, I am on the tree and many children don’t know their parents’ whereabouts. We are helpless,” Adam said. A security source, however, said: “Yes, as I am speaking with you, our troops are already in Jakana and they are engaging the terrorists; they (insurgents) are cowards.”
It was learnt that two days earlier, some locals had sighted the insurgents in hundreds with dozens of gun trucks around the Maiduguri-Damaturu axis, possibly planning an attack.
Top Stories