Chief Nnia Nwodo has cleared the air after reports emerged that he dissolved the UK Chapter of Ohanaeze Ndigbo. 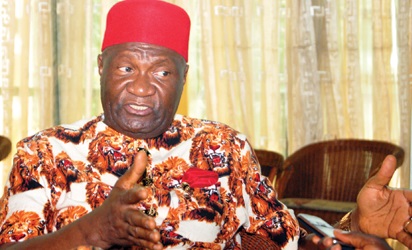 Chief Nnia Nwodo
The President-General of Ohanaeze Ndigbo, Chief Nnia Nwodo has dismissed reports making the rounds that he had dissolved its chapter in the United Kingdom (UK).
Nwodo’s comment followed report in some sections of the media on Sunday which claimed that Ohanaeze Ndigbo chapters in UK and Ghana had been dissolved.
But in a swift reaction on Monday Nwodo told the News Agency of Nigeria (NAN) in a text message that the carriers of such information were agents of mischief.
According to Nwodo, I did not dissolve Ohanaeze Executive in the United Kingdom and Northern Ireland. There is neither a need nor request to do so.
“The reporter was mischievous! Please disregard the false representation.”
Meanwhile, Dr Nnanna Igwe, President, Ohanaeze Ndigbo UK and Northern Ireland, has boasted that the organisation is intact, robust and always working in collaboration with other groups in order to advance the course of the Igbo.
Igwe told NAN on telephone that Ohanaeze was a force to reckon with and as such would ensure unity and peaceful coexistence existed at all times among members to protect and promote Igbo culture.
“We are with other chapters of Ohanaeze worldwide, and they look up to us for direction and we collaborate with the President-General, Chief Nnia Nwodo.
“There is no problem in Ohanaeze in UK, the only thing that exist here is that there are other Igbo organisations just like in any other place, and everyone is trying to say something.
“But as an orgnaisation, there is no problem with Ohanaeze, even yesterday, I was in Manchester and Newcastle, to celebrate new yam festival with sister organisations; so, there is no problem at all.
Igwe also said that the group was working with the Nigeria High Commission in UK for the construction of Igbo International Civic Centre in London.
“The High Commissioner was present during the ‘World Igbo Day’ celebration to raise fund for the civic centre.
“We are holding town hall meetings with different groups on Igbo Unity and Progress.
“We are mobilising and uniting our people and sensitizing them to think home to unite and solve our common problems, especially the security challenges in the country and herdsmen-farmers crisis.
“We have also made it clear that we don’t want RUGA in South-East and we are urging the government to ensure the killers of the Rev. Fr. Paul Offu are brought to justice,” he said.
He added: “So, we are aware of what is going on and we are informing our people here and we are actively working with Nnia Nwodo whom we have confidence in and we will not relent in doing that.
“We are confident that the Igbo will prevail in spite of the circumstances we have found ourselves,” Igwe added.
-NAN
Top Stories