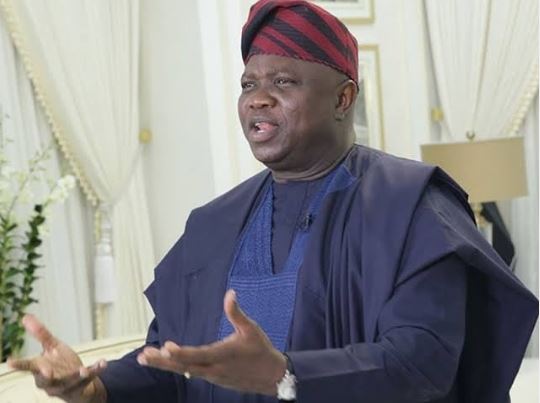 Akinwunmi Ambode
The Federal High Court in Lagos on Tuesday ordered the freezing of three bank accounts allegedly belonging to the Lagos State Government over an alleged  N9.9bn fraud.
The accounts domiciled in First City Monument Bank, Access Bank and Zenith Bank are numbered 5617984012, 0060949275 and 1011691254, respectively.
Justice Chuka Obiozor ordered the “suspension” of the accounts following an ex parte application by the Economic and Financial Crimes Commission.
The EFCC had prayed the judge to freeze the accounts pending the conclusion of investigations and possible prosecution of the Permanent Secretary in the Office of the Chief of Staff to the Governor of Lagos State, Adewale Adesanya, for money laundering.
In an affidavit filed in support of the ex parte application, a member of the EFCC investigating team, Kungmi Daniel, said the commission discovered “a huge inflow of N9,927,714,443.29” from the state accounts into an FCMB bank account opened on September 17, 2018 during the Akinwunmi Ambode administration operated by Adesanya.
Daniel said the schedule of the FCMB account showed how Adesanya and the other signatories to the account made fraudulent transfers from the accounts of the Lagos State Government and dissipated the funds  in the said accounts.
“The trend in the account is that the account always witnessed a huge inflow from Lagos State Government into the above scheduled accounts managed by the respondent (Adesanya),” the investigator said.
He said upon the receipt of intelligence, the EFCC analysed it and found it worthy of investigation.
The EFCC prayed the court to grant them an order to temporarily take over the accounts to enable them  to conclude their investigations.
The EFCC said, “There have been concerted efforts and attempts to dissipate the contents of the accounts listed in the schedule to this application.
“Without freezing the nominated accounts and temporarily forfeiting the money to the Government of the Federal Republic of Nigeria, there is no way the fraud being perpetrated using the scheduled accounts can be stopped.”
After listening to submission by lawyer for the  EFCC, Mohammed Abbas, Justice Obiozor granted the prayers.
He adjourned further proceedings in the matter till September 9, 2019.
The EFCC later on Tuesday issued a statement saying they had secured a freezing order by the court on an account allegedly linked to Ambode.
The PUNCH had exclusively reported in June that loyalists of the National Leader of the All Progressives Congress, Asiwaju Bola Tinubu, were dragging Ambode to the EFCC for investigation.
Spokesman for the  EFCC, Tony Orilade,  said in a statement titled, ‘EFCC Secures Freezing Order on Accounts Linked to Ex-Gov. Ambode over Alleged N9.9bn Fraud’, said Justice Obiozor of the Federal High Court sitting in Ikoyi, Lagos, on Tuesday ordered the freezing of the sum of N9.9bn belonging to the Lagos State Government.
The money was  domiciled in First City Monument Bank account number 5617984012; Access Bank account number 0060949275 and Zenith Bank account number 1011691254, respectively, according to the statement.
A source, however, told one of the correspondents that the accounts had nothing to do with Ambode.
“It is mischief. The bank accounts are not the former governor’s personal accounts; they belong to the Lagos State Government and were used by the previous and present administrations for state administrative purposes,” the source added.
Ex-Chief Press Secretary to Ambode, Habib Haruna, did not take his calls, which rang out several times.
A text message requesting his response to the allegations was also not replied to as of the time of filing this report.
Top Stories