The commission said the proprietors and promoters of the illegal degree institutions must close down their illegal activities within 30 days. 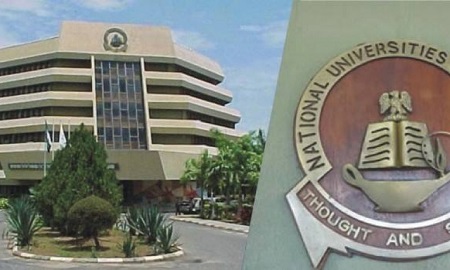 The NUC made this known in an advert placed in some national newspapers on Wednesday.

In the advert signed by its Director of Public Affairs, Ibrahim Yakassai, the commission alerted the public to the illegal operations of the institutions. It said all certificates obtained from them will not be recognised or acceptable in Nigeria for the purposes of employment or further studies.

The commission said the proprietors and promoters of the illegal degree institutions must close down their illegal activities within 30 days.

The commission also directed the illegal institutions to submit their notice of compliance within the stated period or face the consequences of their illegal operation.

“For the avoidance of doubt, all the three institutions above are not known to the National Universities Commission which is the sole regulatory agency for all categories of degree-awarding institutions in Nigeria and any Cross Border education model operating in Nigeria,” the advert reads.

Details of the illegal universities

It gave its address as 11B Fatai Arobikeke, Lekki Phase 1, Lagos. It also claims to be in partnership with Swiss, Frankfort as MAN.

According to NUC, further investigations revealed that NIBS also claimed to be a university in Ghana and located at Plot 2 Arko close, off Nelson Mandela Avenue, near Food and Drugs Authority, Gulf House, South Legon.

NUC said it is in possession of the illegal university’s fliers and pamphlets seeking applicants for Masters of Science (MSc) or PhD in Forensic Accounting and Fraud Investigation/Criminal Intelligent or Security Management Programme, 2019.

NUC said it is in possession of posters advertising the 4th Convocation Ceremony/induction into Doctorate Fellowships which purportedly took place on July 13 at the Berom Outreach Ministries along Yakubu Gowon Way beside Uma Bread, Sabon-Barki, Jos, Plateau State.

The commission said the poster contained the photograph of the Founder/Chancellor, Felix Obajafa.

NUC said the activities of universities violate the Education National Minimum Standards and Establishment of Institutions) Act Cap E3 2004, an Act which similarly mandates NUC to close down all unapproved degree-awarding institutions.

PREMIUM TIMES had reported how the commission released the list of 58 illegal universities in Nigeria in 2018.

The commission also confirmed to this paper in 2018 that a former senator, Foster Ogola’s, Phd certificate is invalid; as the institution he attended was among the illegal universities.

An investigation revealed that the senator, who represented Bayelsa West senatorial district, has fake credentials from an unaccredited university in Nigeria named GMF Christian university.

The National Universities Commission of Nigeria is a government agency promoting quality higher education in Nigeria.