5 Children Of Same Family Burnt To Death In Lagos 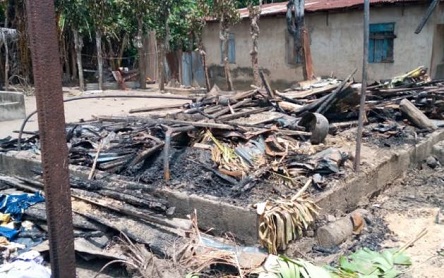 It was a black weekend at the Takwa Bay area of Lagos as five children of same family were burnt to death.

Also, a woman lodger was strangulated in a hotel room at the Morogbo area of the metropolis.

It was gathered that Mrs. Florence Asoye, had left home in the morning to Takwa-bay Jetty, and left her children under the care of a maid who locked the children in the room and left for an unknown destination.

When Mrs. Asonye returned home, she told that her room was completely raised by fire.

The woman who thought maybe that her five children would have been saved, requested for their whereabouts, only to be told by sympathizers that they were burnt beyond recognition.

According to Elkana, information  was received by the police that was a fire incident at Abagbo Village, Takwa-Bay, which claimed the lives of five children from the same family.

” A team of detectives led by the DPO visited the scene. In her statement, the mother of the victims, Florence Asoye, stated that she left home at about 1830hours to Takwa-bay Jetty only to come back to see her room completely raised by fire.

“According to her, she left her children under the care of Sulit, who locked the children in the room and left to an unknown destination”.
Top Stories