A suspected car-snatching kingpin has finally met his waterloo fter being captured by the Police in Lagos. 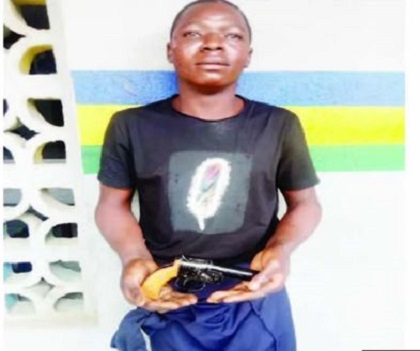 Suspect, Francis Abubakar
Personnel of the Lagos State Police Command have arrested a suspected car-snatching kingpin, and recovered firearms from him.

The suspected car-snatching kingpin, Francis Abubakar, was arrested by the anti-crime patrol team of the Satellite Police Station, while he and his gang members attempted to snatch a Peugeot 307 car at the Mosalasi, Mile 2 area of the state.

The state Police Public Relations Officer, Bala Elkana, said in a statement on Sunday that a locally-made shotgun was recovered from Abubakar and that the suspect had been handed over to the Special Anti-Robbery Squad for further investigation.
Elkana stated, “On August 9, 2019, around 11.10pm, the anti-crime patrol team from the Satellite Police Station foiled an attempt by a car-snatching syndicate to snatch a Peugeot 307 saloon car in the Mosalasi area along the Lagos-Badagry Expressway, Mile 2.

“One Francis Abubakar, who is the ringleader of the gang, was arrested. One locally-made shotgun was recovered from the suspect. The Peugeot 307 was recovered and handed over to the owner. SARS has taken over the case with a view to apprehending other members of the gang. Investigation is ongoing and the suspect will soon be charged."
Top Stories