The journalists sued the Inspector-General of Police, Rivers State Commissioner of Police and Attorney-General of the Federation as first, second and third respondents, respectively. 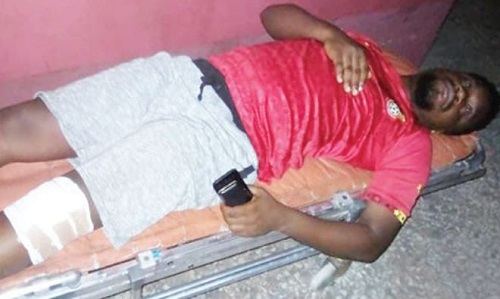 Koffi Bartels
A journalist with the Port Harcourt-based Nigeria Info radio station, Mr Koffi Bartels, has dragged the Nigeria Police to court seeking the sum of N650m as punitive and exemplary damages.

Bartels was on June 4, 2019, rushed to hospital after he was allegedly tortured and brutalised by personnel of the Special Anti-Robbery Squad in Rivers State.

The journalist said he suffered a swollen knee after he was hit several times with wooden bars, while trying to take photographs of the harassment of a boy by the SARS officers at Mgbuoba in the Obio/Akpor Local Government Area of the state.

Bartels said the requested N650m would compensate for his ordeal in the hands of the SARS personnel.

The journalists, had through a document dated July 29, 2019, filed at the Rivers State High Court, Port Harcourt Judicial Division, sued the Inspector-General of Police, Rivers State Commissioner of Police and Attorney-General of the Federation as first, second and third respondents, respectively.

Bartels, in the document signed by his lawyer, Festus Ogwuche and six others, also sought reliefs bordering on the enforcement of his fundamental human rights and freedom as enshrined in the constitution.

He also sought the order of the court to mandate the respondents to initiate criminal proceedings against all the SARS officers involved in the abuse of his rights through torture.

Other reliefs sought by Bartels are, “An order of this honourable court restraining the respondents by themselves, their privies, agents, assigns and servants from further summoning, harassing, torturing, arresting, intimidating and detaining the applicant in any detention centre, including that of the SARS.

“The sum of N650m, being punitive and exemplary damages against the respondents, and for such other orders that the honourable court may deem fit to make in the circumstance.”

Ogwuche pointed out that the initial show of remorse by the police was not sustained, a development that forced his client to seek redress in court.
Top Stories