The Vice President, Professor Yemi Osinbajo went on to eulogise Oyegun for his attributes as an astute politician. 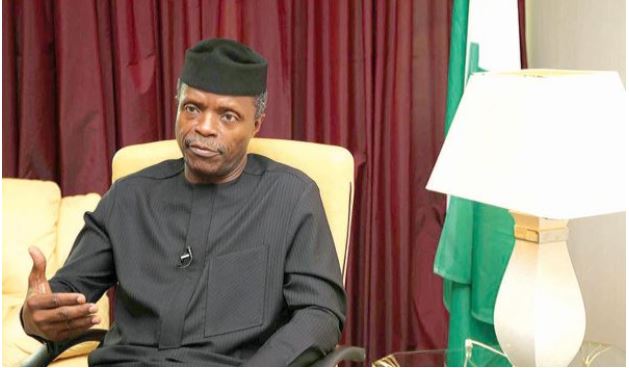 Vice President, Yemi Osinbajo
The Vice President, Yemi Osinbajo has urged leaders of the Peoples Democratic Party, PDP, to join the ruling All Progressives Congress, APC, before they die.
Osinbajo made the appeal on a lighter note during a dinner to celebrate 80th birthday former National Chairman of APC, Chief John Oyegun in Abuja, over the weekend.
According to him, “Let me tell the story of a politician who was a long time, life Republican politician in the US. He was lying down on his sick bed and was about to die and he said ‘I want to change my party, I want to become a Democrat so that tomorrow it will be announced that a Democrat died not a Republican’.
“You can see that we politicians are very faithful and very loyal, indeed. I can only ask our friends in the PDP to also ensure that they cross over before they die. It is time for them to cross over.”
The Vice President went on to eulogise Oyegun for his attributes as an astute politician.
He said, “You always find him on the right side of history, as a founding member of Alliance for Democracy AD, member of NADECO and secretary of those abroad, founding member of APC and the first chairman, the one who led our party to that historic victory to unseat the ruling party.
“The second reason for my admiration is that somehow, he manages to be so deep in the Nigerian politics and yet he doesn’t even look like a politician or sound like one. He always sounds like a fine, well-read, well-spoken gentleman dragged into politics by some rascals but he is an unassuming politician and an astute strategist.
“There is this particular attribute of being in politics without being a politician. I would like to be like Professor (Ibrahim) Gambari when I grow up. I would like to be like that. You know aside from lawyers, I think there is no group of people who are maligned like politicians.
‘’Every time that you come across the Nigerian politician, there is always one way or the other that we are maligned but people like Chief Oyegun have shown that politicians can be loyal, faithful, dusting men and women.”
Top Stories