Methinks Senator Ekweremadu is bearing the brunt of a genuine frustration among Nigerian masses. 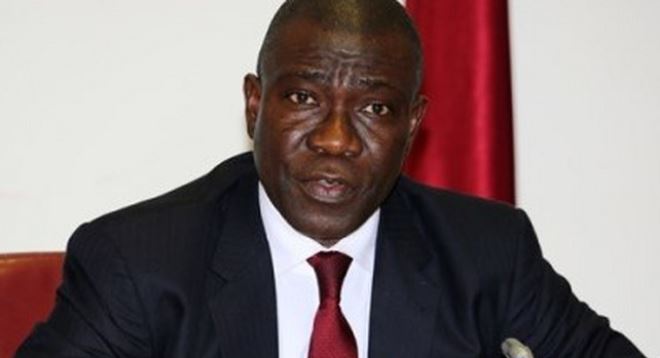 Ike Ekweremadu
The fact that former deputy president of the Nigerian Senate, Ike Ekweremadu, was nearly lynched by an angry mob in Nunberg Germany did not come to many Nigerians as a big surprise given the present helpless frustration among Nigerian masses home and abroad.
Someone even said that many such politicians would have been waylaid and dealt with by the home branch of the masses had it not been for the often AK-47-weilding security officers frequently shielding them back home.
For the record, this is not the first time a Nigerian politician has been harassed outside the shores of the country. Recall that on March 10, 2016, then Governor Rochas Okorocha of Imo State was disgraced at the Chattam House, London by a solo IPOB protester who called him a “liar’’ and “murderer’’, stoically determined to stop him from making an address.
What is however intriguing about Ekweremadu’s ordeal was that he was physically attacked and made to scamper into a waiting car by a seemingly angry IPOB mob baying for blood. A loud protester could be heard in the background of a 56-second video that showed the ugly event lamenting about how the senator’s constituents were being massacred by herdsmen while he could afford to party and wine in a foreign land.
Methinks Senator Ekweremadu is bearing the brunt of a genuine frustration among Nigerian masses. The security situation in the country has deteriorated, with unabated killings by alleged Fulani herdsmen who have been sacking communities and kidnapping travellers in the North-West, North-Central and southern Nigeria. This situation coupled with a tumbling economy and a seemingly clueless helplessness by the current administration has compelled Nigerians abroad who share the pains and burden of their relatives at home to see travelling politicians as a convenient catharsis for their frustrations. This is a luxury they can afford to enjoy in foreign lands where civil liberties are part of daily life. Unfortunately, their counterparts at home are hampered by the ever-brutal security forces which are happy to use maximum forces on peaceful protesters. One can only imagine what would happen if the often-worshipped politicians are ever physically harassed.
That should not be so. Although I personally do not support physical assaults on public officers no matter what the gripes are, public protests and civil demonstrations are a part and parcel of a healthy democracy – more so, when it is recognised that those occupying such positions are accountable to the masses. It is common to see presidents egged and drenched by angry protesters in civilised countries, a sign that power belongs to the people. Such outpouring of emotions when not lethal or life-threatening is totally permissible, if it galvanises public functionaries into living up to their responsibilities.
Ekweremadu may have been an unlucky scapegoat (given his decent representation in the Senate) who has taken one for a political crop perpetually accused of being ensconced in obscene luxuries and cloistered from the everyday grind of the long-suffering citizenry, but his ordeal is a warning that “abroad’’ may no longer be a safe haven for leaders who shirk their main responsibility of representing the interests of the masses.
Oliver C. Orji,
England, United Kingdom
[email protected]
Top Stories