Shock As Man Gets Nabbed Inside Airport After 'Swallowing 1,200 Grams Of Cocaine '


A man has been nabbed inside an airport after he was found out to have swallowed an incredible 1,200 grams of cocaine. 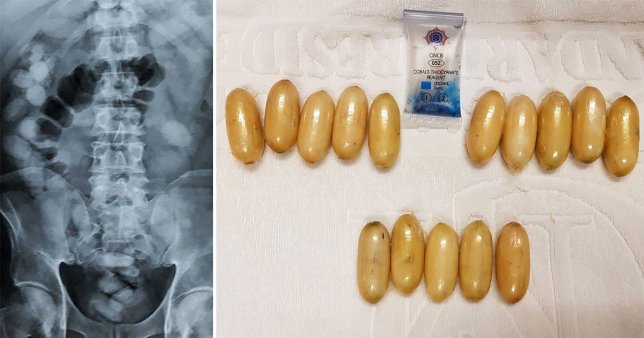 Police say the suspect swallowed 68 capsules of the drug (Picture: AFP/Getty Images)
A Kenyan drug smuggler was arrested at a Thai airport after swallowing 68 capsules of cocaine, authorities claim.
Glenn Chibasellow Ooko, 43, was arrested at Suvarnabhumi International Airport this week after it was discovered he has 1,200 grams of the drug on him. Nigerian national Joseph Ukpa Osita, 40, who allegedly hired him to bring drugs into Southeast Asian countries was later arrested in Bangkok.
Office of the Narcotics Control Board (ONCB) chief Niyom Termsrisuk said airport task force officers have arrested 43 people for drug smuggling offences between last month and October 2018.
Seven were trying to bring drugs into the country and 38 were trying to smuggle drugs out, The National Thailand reports. Niyom warned Thais not to carry strangers items for them when travelling abroad because it could be a ruse to get them to carry drugs.
He said there is a particular issue of people being duped into smuggling drugs into Japan, especially women promised free travel.
***
Source: Metro UK
Top Stories