Many people are not aware that there are some places in the world where women are more important than men. 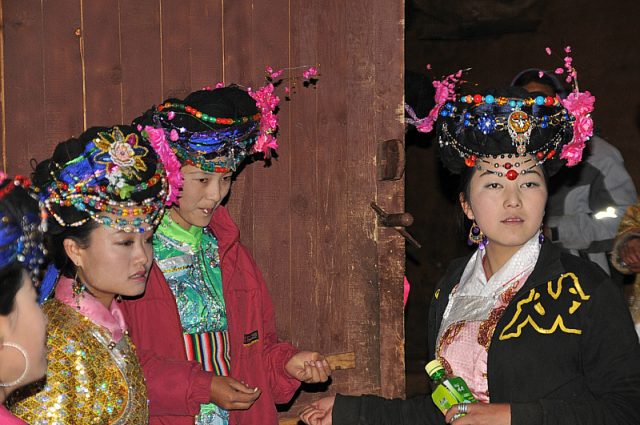 The Mosuo people of China. Photo credit: Christian Girault
Many people will be shocked to know that there are communities around the world where women are bosses over men. Some of these communities are matrilineal and matriarchal with women regarded as more important than men.
We have researched and here is our findings:
1). Mosuo people of China
The Mosuo or Na people of China are a small ethnic group living in Yunnan and Sichuan Provinces in China with a population of approximately 40,000.
The Mosuo people operate a matriarchal society unlike the patriarchal society that is predominant in many communities around the world. It means that the women take the role of head of family. They are held in high esteem as such dominate the household and family. They are responsible for housework, agricultural duties, and taking care of children.
Also, these women are responsible for most domestic jobs and are viewed with more respect and importance than men. The man is left with less or no work to do. Even after birth, the man has no moral, cultural, or legal obligation to take care of the child.
The role is left for the woman and if it is too much for her, her extended family are always willing to help her out.
When it comes to marriage, the Mosuo people operate what is called ‘walking marriages’ ie the women are the ones who choose partners and not the other way round. Again, there is nothing like marriage as the man does not live with the woman. In fact, the woman can have multiple partners as she wishes. The man is allowed to pay visits.
Mosuo people forbid the eating of dogs and regard the animal as a member of their family.
2. Minangkabau of Malaysia
The Minangkabau people are regarded as the largest matrilineal society in the world. They are about 4.2 million in number. In the world of the Minangkabau, women rule. Property, family name, land are passed down from mother to daughter, while religious and political affairs are the responsibility of men. However, some women still play important roles religiously and otherwise.
When a woman marries, she’s expected to remain in her mother’s house and her husband can pay visits. The man is also expected to wait for a woman to propose and marry him unlike what is obtainable in a patriarchal society.
It is important to note that the introduction of Sharia and modern lifestyle into the culture of the Minangkabau people is now favouring the men who are beginning to wield a greater influence and power.
3. Akan people of Ghana
The Akan people can be found in the southern regions of Ghana. One notable thing about this people is that their society is built around matriclan – lineage, inheritance of property, and succession to high political office are traced in matrilineal order.
All matriclan founders are female, but men traditionally hold leadership positions within the society. These inherited roles, however, are passed down matrilineally—meaning through a man’s mothers and sisters (and their children). Often, the man is expected to not only support his own family, but those of his female relatives.
Men and women alike have opportunities to rule as king or queen. It is not certainly a matriarchal society, because just like women, men also assume very important roles.
4. Bribri people of Costa Rica
The Bribri are a small indigenous group of people from Costa Rica. They are found in the the mountains and Caribbean coastal areas of Costa Rica and Northern Panama. One distinct feature about this people is that they operate a matrilineal system – Lineage is traced through the mother.
This means that women have a very important place in Bribri society and are the only ones that can inherit land and prepare the sacred cacao (Theobroma cacao) drink that is essential for their rituals.
Men also have exclusive roles like – they are the only ones allowed to touch the remains of the dead, sing funeral songs, and prepare the food eaten at funerals.
5. The Garos
This matrilineal society of people reside in the Indian states of Meghalaya, Assam, Tripura, Nagaland, and neighboring areas of Bangladesh.
Inheritance and clan titles are traced from their mothers ie, property is owned by women, while the men govern the society and domestic affairs and manage the property.
However, it must be noted that the Garos do not operate matriarchal society.
Traditionally, the youngest daughter (nokmechik) inherits the property from her mother. Sons leave the parents’ house at puberty and are trained in the village bachelor dormitory (nokpante). After getting married, the man lives in his wife’s house.
In Garo habitations, the house where unmarried male youth or bachelors live is called Nokpante.
However, due to modernization, some of the traditions observed way back are now a thing of the past as parents treat their children equally, including the sharing of properties.
Others are:
6). The Nagovisi people of South Bougainville, an island west of New Guinea.
7). The  Serer tribe found in the present day Gambia and southern Mauritania.
8). The Aawambo or Ovambo people of Namibia.
9). The Nubians who originated from a region along the Nile River found in present-day Sudan and southern Egypt.
10). Ngazidja tribes men of Comoros.
Source: FamousUSA.com
Top Stories