The group in a statement on Wednesday by its Director, Isahq Akintola, also called Wike a pathological liar for denying pulling down Trans-Amadi mosque. 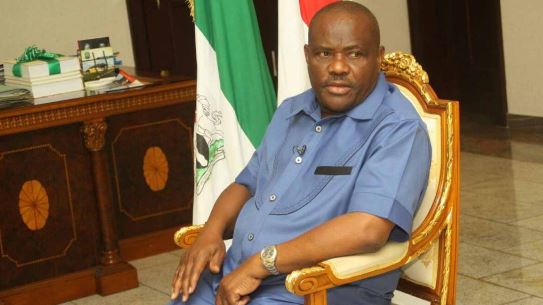 Governor Nyesom Wike
The Muslim Rights Concern (MURIC), an Islamic human rights organisation has again attacked Governor Nyesom Wike and his administration over the alleged demolition of a mosque in Rivers State.
The group in a statement on Wednesday by its Director, Isahq Akintola, also called Wike a pathological liar for “denying pulling down Trans-Amadi mosque”.
“Was it knocked down by invading elephants? Was there a cyclone in Port Harcourt? Wike can say that to the marines. Nigerians have seen a manifestation of the five evils Chamberlain spoke about in Rivers State: brute force, bad faith, injustice, oppression and persecution”, it read.
The group recalled that “Just two months ago (June 2019), he said, ‘Rivers State is a Christian state and I have no apologies for saying that.’
“A cleric from the South West who was in the gathering commended him for making such a declaration. Any reasonable person will tie the two incidents together. We are constrained to congratulate Wike for walking his talk. It was like, ‘I told you people that this state is a Christian state and you are still building a new mosque. Boys! Go and pull it down!’
“He admitted pulling down ‘an illegal structure’. But how can a building whose plan was approved by the state government before you came into office become illegal? For the avoidance of doubt, the survey plan number of the building is AI/RV2009/D13 and the building plan number is RTP/09/617. Both were approved by the state government since 2009.
“As far as Nigerians are concerned, those two documents are vital and a mosque is a mosque, whether it is a completed structure, half or quarter completed. Muslims congregate there and worship. There are uncompleted mosques all over Nigeria where Muslims worship daily. The case of Trans-Amadi Mosque cannot be isolated.
“Just yesterday, a church leader boasted that it planted 65,000 churches in six months. He has our best wishes but no state governor has the right to demolish our mosques no matter how poor they may appear. We cherish the devotion of Muslim worshippers and the serenity of our poor mosques more than any outward embellishment. Didn’t the Bible say ‘God is a spirit and they that worship Him must worship Him in spirit and in truth? (John 4:24)
“Your Excellency, pictures do not lie. Neither do video clips, unless they are doctored. We watched three video clips where you declared that Rivers State is a Christian state. Can you deny that? We raw the rubble where there used to be a mosque structure. But you are now denying that you demolished a mosque. Who does not understand semantics?
“Oh, we can see clearly. It became illegal because it is a mosque and it must go down because no new mosque must emerge after the ‘almighty’ governor has declared the state as a Christian state. A la l’etat c’est moi, n’est c’est pas? It had better not be. Even Louis XIV to whom that infamous declaration is attributed regretted his feudal absolutism on his deathbed when he said, ‘Je m’en vais, mais l’Etat demeurera toujours’, i.e. ‘I depart, but the State shall always remain’.
“Wike is definitely not the only Christian governor in a Christian-dominated state. Ten other states in the sub-region have very large Christian population: Abia, Akwa Ibom, Anambra, Bayelsa, Cross River, Delta, Ebonyi, Edo, Enugu, and Imo. But Wike is the only one who declared his state a Christian state. Wike wants to be more Christian than Jesus. What of the other governors? Are they not Christians as well? Who did this to Rivers State?
“The executive governor of Rivers State is now running from pillar to post in order to cover his tracks. But it is too late. Words are like eggs, they break into fragments once they are allowed to drop. Again, we must note that he repeated those words on three different occasions and in the presence of journalists. Once is happenstance, twice is a coincidence. The third time is enemy action. True to his words, Wike took a wicked decision, viz, to pull down the house of God.
“It is now clear to all and sundry that Wike does not look before he leaps. He acts on impulse. He should have known the implication of pulling down a mosque two months after declaring his state a Christian state. That is the question. That is the crux of the problem. They say action speaks louder than voice. This demolition is even worse than Wike’s unconstitutional declaration. We have no scintilla of doubt that Wike’s wicked action is a followup to his declaration.
“Our message to Governor Wike is this: Your Excellency sir, verily indeed we say unto you, you have bulldozers, we have Allah. You may bring down our mosque. You cannot remove iman (faith) and piety (taqwah) from our hearts. Islam is in our lives and a million bulldozers cannot extirpate it.
“To deceive Nigerians after demolishing a mosque, Wike argued that there were other mosques still standing in Port Harcourt. We reject Wike’s warped thinking. Those mosques he refered to were built before he came to power. They were built during the reign of governors who were not boastful, arrogant, belligerent and power drunk.
“It will be in Wike’s best interest to invite the management of Trans-Amadi Mosque which he pulled down wilfully, consciously and deliberately. That action is illegal, unlawful and unconstitutional in view of a court declaration that the property belongs to the Muslims.
“Wike is advised to undo what he has done by engaging the management of that mosque in dialogue. Wike must refund the total cost of what he caused to demolish and allow construction work to resume at the site. Only this can douse the tension generated by Wike’s wicked act. In addition, the Roi Soleil of Rivers State is advised to, in his remaining days in office, engage in tactical withdrawal of his inflammatory, unguarded and unconstitutional statement about his state being a Christian state.”
Top Stories