The long arm of law has caught up with some notorious vigilante members who allegedly murdered a student of Olabisi Onabanjo University. 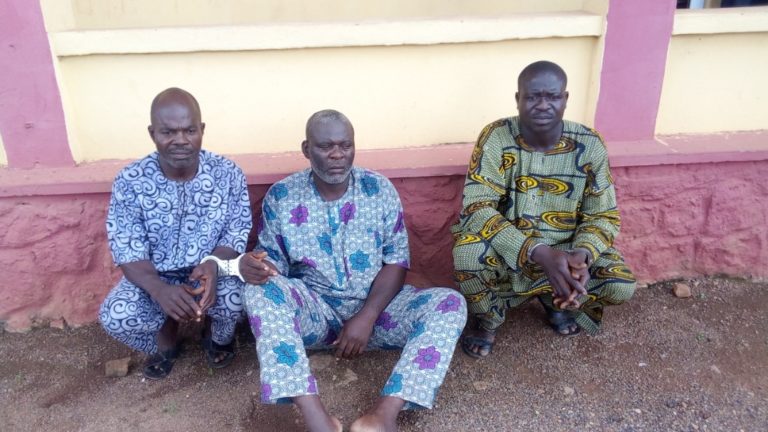 The suspects
Police operatives from the Ogun State Command have arrested three members of a local vigilante group over the gruesome murder of 24-year old student of Olabisi Onabanjo University, Ahmed Obisanwo, and his corpse thrown into the river.
According to a report by PM Express, the Ogun State Police Public Relations Officer, DSP Abimbola Oyeyemi. He said that the men of Ogun State Police Command on 26th August, 2019, arrested three members of a local vigilante group in Ijebu-Igbo popularly known as “Yaluwon” over the gruesome murder of a 24-year old 400 level student of Olabisi Onabanjo University.
The suspects namely: Idowu Ayodele  a.k.a Olori Odo, Segun Ogunbanwo a.k.a Kikisore, and Salisu Akeem were arrested following a petition written to the Commissioner of Police by the father of the victim, Surakat Obisanwo.
In the petition, the father of the victim complained that his son, Ahmed Obisanwo and one of his friends, were arrested on 8th August, 2019, at Ijebu-Igbo by the local security outfit on allegation that the two friends were members of Eiye Cult group.
He further stated in his petition that the security men claimed that they were taking the arrested victims to Ijebu-Igbo Police Station but the enquiry made at the Police Station revealed that the boys were never taken there and since then the where about of his son is unknown.
DSP Oyeyemi said that on the strength of the petition, the Ogun State Commissioner of Police, CP Bashir Makama, directed the Ant-Cultism section to investigate and unravel the mystery behind the disappearance of the victim.
The team embarked on technical and forensic investigation through which they discovered that the two boys were never at any time taken to the Police Station but instead the security men released one of them and killed the other one, who happened to be the son of the petitioner.
After killing him, they stripped him naked before throwing it into Osun River for it to flow freely into the lagoon.
Items recovered by the Police from the suspects included: 4 locally made double barrel guns, 10 live cartridges, 1iron axe, 1 native dagger and 1 jacket with security inscription on it.
DSP Oyeyemi said that efforts were in top gear to apprehend other members of the group connected with the case.
Top Stories