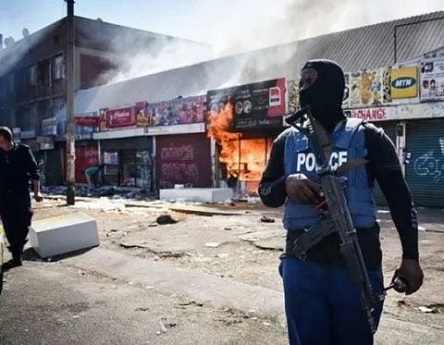 Nigerians resident in South Africa have been advised to avoid the Pretoria Central Business District (CBD) until the Police authorities certify the area safe for foreign nationals.

The Nigerian Union in South Africa (NUSA) gave the counsel in the wake of xenophobic attacks early yesterday following the torching of a shop belonging to a Nigerian in the business district.

NUSA’s warning came on a day South Africa President Cyril Ramaphosa said that his administration was upset about the protracted killings of Nigerians in the former apartheid enclave.

Ramaphosa spoke in Yokohama, Japan, after holding a bilateral talk with President Muhammadu Buhari on the sidelines of the ongoing seventh Tokyo International Conference for Africa Development (TICAD7) in Yokohama, Japan.

According to him, the trend had necessitated the call for a meeting of the leaders of both countries on how to promptly nip the matter in the bud.

In a statement yesterday, NUSA’s President, Adetola Olubajo said: “Violent looting and burning of foreign-owned businesses started in the early hours of today, Aug. 28, at the Pretoria CBD. The foreign-owned shops and offices were targeted by angry taxi driver rioters.

“The violent revolt and looting have been fueled by the death of a taxi driver allegedly by Tanzania nationals on Tuesday at Pretoria CBD.

“Not less than two buildings were burnt by the angry mob. This was done after the stocks in the various shops were looted by the rioters.

“The situation was very volatile this morning but the joint efforts of South African Metro Police and South African Police Service members helped to curb the violent looting and attacks, although the situation is still tensed at the area as several roads were blocked for motorists.’’

According to him, only two Nigerian-owned businesses were identified to be affected when he issued the statement. The affected stores were identified as Furniture/Electronics shop on Sisulu Street and Gold Exchange Business on Lillan Ngoyi Street. They were looted before being set ablaze by the rioters.

He said: “Information reaching us is that some foreign-owned businesses have been marked to be attacked over the night.

“The Nigeria High Commission in Pretoria has been informed of the planned overnight attacks and looting of foreign nationals businesses.”

South Africa 🇿🇦: what is wrong with this country sef?