It was learnt that the flood was as a result of a heavy downpour on Tuesday night and people have been unsettled by the aftermath. 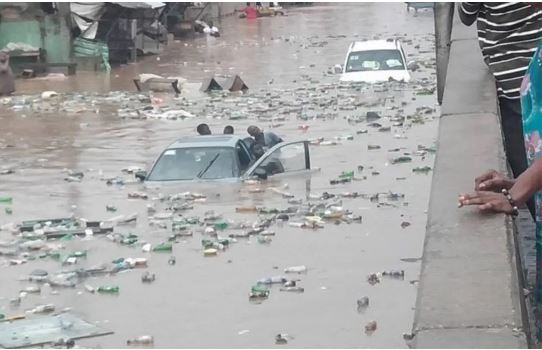 File Photo
There is palpable tension in Ibokun, in Obokun Local Government Area of Osun State, as hundreds of residents have been displaced by torrent floods that destroyed property worth millions of Naira.
DAILY POST learnt that the flood was as a result of a heavy downpour on Tuesday night.
It would be recalled that the Nigeria Hydrological Services Agency (NIHSA) had earlier alerted Nigerians of a high probability that a total of 74 Local Government Areas across the country would be flooded in 2019, during the peak of the rainy season.
The agency further said that all the 36 states of the federation, including the Federal Capital Territory, are expected to experience different levels of flooding with Osun, Lagos, Benue, Oyo, Cross River, Sokoto, Plateau, Abia, Edo topping the list.
According to one of the affected residents, Mr Solaja Emmanuel, the incessant rainfall in the area had overflowed Olooyo river, along Ipetu Ile-Ibokun road, which eventually resulted in the heavy flooding.
“The route is indeed strategic to the economy of the state of Osun as it connects Ikirun, Iragbiji, Ipetu, Ibokun , Esa-Oke, Ijebujesa, Ilesa up to Ondo, Ekiti, and Kogi states, including the Federal Capital Territory”.
Meanwhile, a member of the Osun State House of Assembly, representing Obokun State Constituency, Adewumi Adeyemi, while commending the past administrations in the state for the efforts directed towards channelisation of water and rivers, however, appealed to the incumbent Governor, Gboyega Oyetola to assist through prompt emergency response.
Top Stories