Inside Bobota Village, The Tabara Community That Has Lived For 100 Years Without 'Water'


The story has been told of the community in Taraba state which has lived for as many as 100 years without good water. 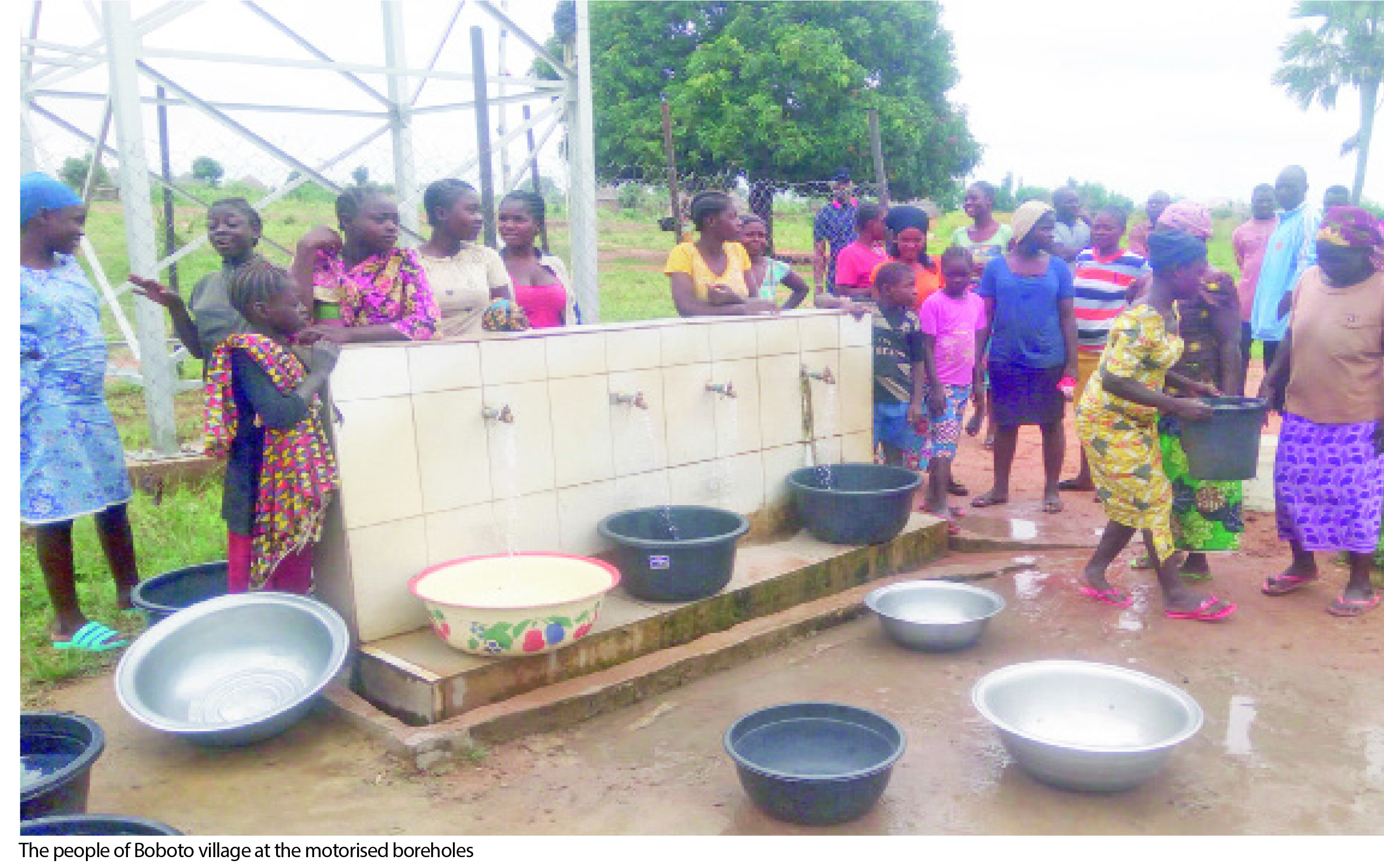 For the people of Boboto village in Yorro Local Government Area of Taraba State, lack of potable water has been an obstacle to their education, civilization and quality of life.

However, last week, Community and Social Development Projects (CSDP), came to their rescue, providing them with potable water after over a hundred years of wait, in which they relied on water from ponds to survive.

As water gushed out through the five nozzles for the first time, members of the community could not hide their excitement. For them, the century long wait for potable water offers them a plethora of opportunities to improve on their farming and attend to other related developmental needs, apart from being a source of healthy water supply.

Twenty-five-year-old Joseph Shonva told Daily Sun that the provision of potable water right at his door-step has not only ended his agony of crawling to the ponds for his bath and laundry, but has significantly made up for his inadequacies. Physically challenged Shonva said: “My physical disabilities and the inconveniences that come with it have been reduced to a great extent with this project. I don’t have to crawl for hours just to go and take my bath and wash my clothes. Water is right at the back of my house and I feel very complete now.”

Kpanti Sindi Shonvo, the village head, said lack of water has always been the problem of the community since they settled in the area almost 200 years ago. He added that successive governments always promised to provide them with water but always failed:

“It has been a very difficult experience for us. I am so excited that Governor Darius Ishaku, in collaboration with the CSDP listened to our cry and has brought this succour to our people. In the past, our women had to go to the pond that is very far away from here to go and fetch water. That is the same pond where our animals also drink.

“During the day season, some of our children will even stop going to school because of water. They will spend long hours at the pond waiting their turns to fetch water. All of that is put to rest now. With this borehole, half of our problem is solved. Everyone is happy. The men, women, children, our animals and those making Burukutu (local beer) for us are all excited and happy.”

“In the past, we would wake up very early and walk for over thirty minutes to the pond where we used to fetch water. Because that was the only source for us and other neighbouring villages, we would have to take turns to fetch water. By the time we got home, we always ended up late at school.”

Angel Amos, 15, is still in JSS at that age. She blames it all on poor water supply to her community: “By now, I am supposed to have finished secondary school but I am still in JSS two because I have had to skip school severally just to assist my family at home.

“Usually, it is the women that go to fetch water and so as the only female child, the task of supplying water for the household rests with me and my mother. So before we could go to the pond twice or thrice a day, to fill our pots, it will be too late for school. That is why I have delayed for so long. Thank God I can put all of that behind me and face my studies.”

But it is not just the students that are excited. Their parents now see a brighter future for their children and wards. For Nyasa Kefas, a father of four, who grew up mostly in Jalingo but had to retire home with his children, the water project opened up a new chapter of hope for his children and other children in the community:

“Now my children can go to school early unlike before. They no longer have any reason to be sleeping in the class. Most significantly, we don’t have to be so scared of an epidemic each time we here if cholera outbreak. I commend CSDP and the state government for this project. It couldn’t have come at a better time.”

The provision of this water facility is also a major boost to the economic life of the inhabitants of Boboto. Anthony Arama is the official brewery of the community:

“I make Burukutu here everyday and all the people in the community know me for that. In the past, there were times I socked guinea corn or millets for it to ferment. Because there was no enough water to continue with the process, I would bring it out and dry it. This usually affected the quality of the beer and it made some of our men to travel to other villages to go and drink Burukutu. It was as if I don’t know my work.”

General Manager of CSDP in Taraba, Mr Iremia Ezekiel Danjuma, promised to provide potable water to remote areas of the state to alleviate the scourge of lack of water during the World’s Water Day celebration. He disclosed that the CSDP also provided six solar/ motorised boreholes, line wells, surface tanks for rain water and water source harness in remote areas where drilling is nearly impossible.

He lamented that people have had to share ponds with cattle and other animals in some communities. He commended government for supporting the CSDP to ensure that potable water is brought to the doorsteps of the rural dwellers as well:

“On the Mambilla Plateau where drilling boreholes is almost impossible, we have provided water harnesses and surface tanks for rain water so that the abundant rain there is harnessed and put to use. We still have a lot of projects that are on-going and we would complete all of them in good time”.

He enjoined the people of Boboto community to take charge of this project and ensure its security, “because we cannot come to protect it for you.”
***
Source: Sun News
Top Stories