The very sad story has been told of the nine-year-old by who wants to become a pastor in Kaduna state. 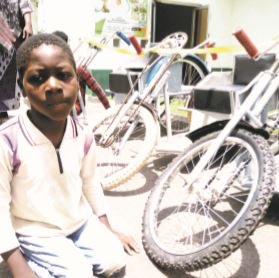 Isaac Iliya
In what looked like a rekindled hope, little Isaac Iliya was full of smiles last Saturday. He was among the 10 survivors of polio given tricycle wheelchairs by the Rotary Club of Kawo, Kaduna.

However, The Nation’s check revealed that, behind the smile of the nine-year-old boy, is a lifetime of tragedy. Isaac had lost his parents at infancy, dropped out of school at the age of six and cannot walk at nine.

But, unlike other beneficiaries of the Rotary Club’s gesture, Mrs. Doratthy Kukon, Isaac’s aunty, said his case is not that of polio, as he was never diagnosed for one, though he has never walked in his life.

His joy at the occasion was informed by the knowledge that with the wheelchair, he will now be able to go back to school and pursue his ambition of becoming a clergy.

Isaac, The Nation learnt, had to stop going to school when his siblings could no longer carry him on their back to and from the elementary school in their neighborhood. At age six, he had gained more weight and carrying him became difficult by the day.

His siblings, who were determined to see him become educated like them were, however, enduring his weight, until the private school they all attended was relocated away from their neighborhood. He then had to stop going to school.

“I thank God, I now have the opportunity of going to school again. I will now make new friends. I will read well because I want to become a pastor. I want to preach to people.

“I’m very happy today. May God bless these people that gave me wheelchair. Now, I can ride my wheelchair to school on my own”, Isaac enthused.

While recalling the difficulties he passed through going to school earlier, Isaac said: “My sister tried for me a lot when she used to carry me on her back to and fro school. I used to feel her pain too. In fact, I never liked it too; I would have loved to stand on my feet and walk by myself too, but I cannot.”

Narrating her little niece’s story, Mrs. Kukon said: “I am presently the mother of Isaac. His mother, who is my elder sister, died shortly after giving birth to him. So, I took him right from birth. Since then, he has been with me.

“Isaac is presently nine years old. But, he can’t walk. I have tried all means possible to see that he walks; I took him to hospital, I took him to neurologists, yet it didn’t work out. So, I decided to leave everything to God.

“I noticed before he became one year that, something was wrong, because we were trying to see that he moves and starts walking all to no avail. So, I started taking him to the hospital to find out what was happening to him. In all the hospitals we took him to, they didn’t say anything other than that we should go for therapy. We went through series of therapy, but no result. Till date, we have tried all we could, but it didn’t work out.

“The hospitals didn’t diagnose him for anything. So, I am sure his own is not a case of polio. The doctors didn’t mention anything like polio to me. And I took him for every immunisation vaccine right from when he was a baby. So, I  wonder till today what could be the problem.

She said: “Despite his condition, Isaac started school but he had to stop along the line, exactly three years ago, because his siblings could no longer carry him on their back.

“His siblings, that is, my own children really love him and would do anything to see that he goes to school like them, but the problem was that, the private school they were all going to was relocated away from our neighborhood and Isaac had also gained more weight. So, they could no longer carry him on their back to school.

“That is why I reached out to this NGO, Daharatu Mismas Foundation, to help us get a wheelchair for him. I’m happy today that they have equally reached out to Rotary Club, which is today giving him and nine others wheelchairs.

“Yesterday, when I broke the news to him, that he was going to get his wheelchair, he jumped up and said: ‘Thank God. Now, you are going to buy me clothes, shoes and books and I will go back to school.’ I said, by the grace of God, I will do that and you will go to school.

“Isaac so much desires to go back to school. In fact, since that yesterday when I broke the news to him, he has not eaten till now out of excitement. If I ask him, come and take your food, he would say, I’m okay, let’s just go and take my wheelchair.

“This is the miracle I was trusting God for, because I really wanted him to go to school, but due to the movement challenge he had to stop, and I cannot afford the daily transport too. Now, with this, I am going to enroll him in a private school close by called Divine Grace.

“I believe Isaac will be great in life. He is a child that speaks his mind out, but he doesn’t just talk anyhow. I believe that, there is a divine voice behind him when he told me he will become a pastor. I have been praying for him and I believe he will succeed,” she said.

Also speaking to The Nation, Hajia Daharatu Ahned Alliyu, founder, Daharatu Mismas Foundation, an NGO that has been seeking assistance for Isaac’s return to school said it was the best moment in the life of her foundation.

According her, “I am overjoyed today and I shed tears. This is because I see Isaac very happy and smiling. I am also very happy that a chance has presented itself for Isaac, a nine-old-boy, who dropped out of school over three years ago, to return to school. I’m happy today that our foundation, which has been reaching out to get support for Isaac, is today receiving a tricycle wheelchair for him from Rotary Club of Kawo, Kaduna. And we are saying thank you to the District Governor of the club, Mr. Victor Onuwugha,” she said.

Donating the wheelchairs to the 10 beneficiaries at the Kaduna Golf Club, the Dictrict Governor, Victor Onuwugha, said the gesture was part of the many Rotary Club’s ways of assisting the less-privileged in the society.

He said the beneficiaries were carefully selected to benefit from the tricycle wheelchairs.  “These polio survivors were carefully selected to benefit from this gesture because we have learnt about their struggles to be useful to themselves and the society, despite their disability status.
“So, this donation is to assist them, to aid their movement in the course of going about their normal businesses. It might interest you to know that each one of them is either working, learning a trade or going to school,” he said.

He, however, advised them against selling the wheelchairs.
***
Source: The Nation
Top Stories