A Nigerian pastor who used his son's 'yahoo yahoo' money to buy land for church has spoken out after being nabbed. 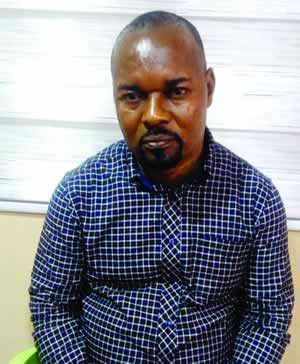 What is the name of your church?

The Word of Truth Church.

What is Emmanuel’s position in the family?

I have three children. He is the second child.

What do you know about this case?

Sometime last year during his holiday, he came home. After some time, he told me he was going back to Ebonyi. I asked him what he wanted to do there because the place is very far. I even regretted sending him to school in a far place like that where I wouldn’t be able to closely monitor what he is doing. He said he wanted to design some things for a company. He said the company had placed an advert to employ people who could design for traders and that he was selected. Then someone called me and told me he was Nnena Francis from one ‘Royal Company’ and that my son had been short-listed for the job – doing computer designs. The person begged me to allow my son to do the job. He said my son told them that he would not come unless I gave him permission. It was a tug of war before I got convinced. I never knew it was a dubious deal.

He came back about three weeks after without any money. I asked him if the company did not pay him any remuneration for his service and he said they would pay him when they were paying workers’ salaries. I sent a message to the so-called Francis to express my anger. I felt bad. Last month, when he was on holiday again, my son came home with N500,000. He claimed he had been paid by the company and that he was asked to come back for the job. He told lies because he knew I would be mad at him if I was aware of what he was doing. I am a disciplined father.

Did you verify the payment from Francis?

He was the one who even called me. He said the work that my son did for the company was not very good and that I should allow him to come back to fix it. For the fact that he was paid N500,000 for the work, I allowed him to go.

What did you do with the money?

My son deposited it in my account. I told him we would use the money to change his school to Lagos so that I could properly monitor him. He collected some amount from the money. Meanwhile, there was a land we wanted to buy to build a church. I felt that if I kept the money, he would continue to take from it. I used it to buy the land though I had expectations of repaying the money so that we could use it to change his school. That was how I became involved in this case. He was aware I borrowed the money. We have not even paid all the money for the land, which is worth N1m.

When did you know the money was proceeds of fraud?

It was after the police arrested us and brought us here that I knew the true story. I was having devotion when I was told some people were outside looking for me. I had not even had my bath. I thought the money was income from a legal job. It did not occur to me that it could be fraudulent. That was why I didn’t spend it anyhow; rather I borrowed it and promised to refund it.

How did you feel when you knew the true story?

I felt bad, especially because of my career. I have promised to pay back the money, including the one he had spent. I only need some time to raise the money.

Where is his mother?

She is at home.

Was she aware of her son’s plan to go back to Ebonyi during the holidays?

I told her. How would she not know that her son was going back to such a far place?
***
Source: Saturday Punch
Top Stories