He appealed to the police to exhibit professionalism in the handling of the attack on the ex-governor. 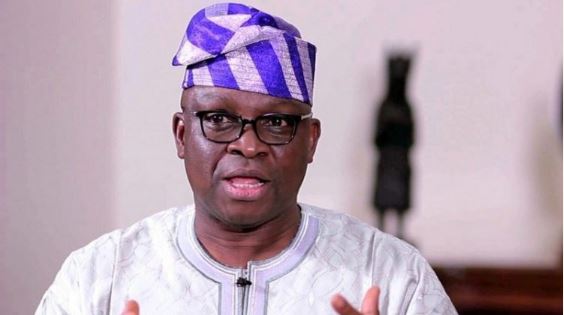 Ayodele Fayose
The Peoples Democratic Party, PDP, in Ekiti State has condemned an alleged attack on former Governor Ayodele Fayose in Ado-Ekiti, the state capital.
Recall that Fayose had alleged that he narrowly escaped being attacked by some men in a pickup van who trailed his vehicle after he left the state House of Assembly in Ado Ekiti where he said he had gone in response to the legislative body’s summons.
In a reaction, the PDP state chairman, Chief Gboyega Oguntuwase, in a statement on Sunday, accused the ruling All Progressives Congress, APC, of masterminding the alleged attack.
He appealed to the police to exhibit professionalism in the handling of the attack on the ex-governor.
He called on traditional rulers in the state to prevail on the All Progressives Congress not to introduce another era of violence into the state.
The statement reads in part, “I personally protest the attack on Fayose. As the PDP leader in the state, I say we don’t deserve it because nobody harassed the opposition under our watch.
“A pollution of the river of peace in Ekiti will not be to anybody’s advantage. One monumental feature of the APC government is the intimidation and harassment of opposition .
“It is an irony that leaders who in obedience to a summon by a legislative body can be ambushed shortly after the visit to be harrassed and threatened with weapons.
“This is not good for Ekiti or Nigeria.”
Top Stories