DSS Vs IPOB - A Night To Remember In Nnewi


They said they had orders from Abuja to stop him from attending because, apart from being my lawyer, he is also the lawyer to Mazi Nnamdi Kanu and IPOB. 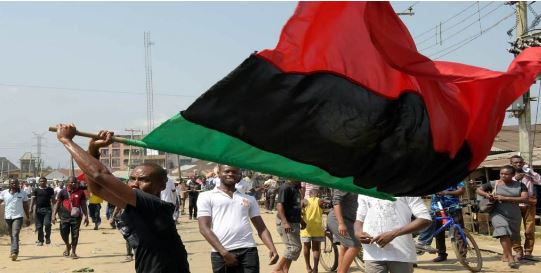 As I was about to enter the hall to deliver my speech at the Anaedoonline 1st year Anniversary Lecture in Nnewi, Anambra state on Sunday September 1, my lawyer and a member of my delegation, Mr. Ifeanyi Ejiofor, and I were approached by the DSS and told that he must not attend the event.
They said that if he insisted on attending the occasion with me the venue would be sealed up and the entire event would be stopped and not allowed to hold.
They said they had orders from Abuja to stop him from attending because, apart from being my lawyer, he is also the lawyer to Mazi Nnamdi Kanu and IPOB.
I was shocked. This was a clear case of not just persecution but also guilt by association. I wondered whether being a lawyer to my friend and brother Mazi Nnamdi Kanu or to IPOB was now a crime?
My stomach turned as I listened to the words of the DSS operative. I took a deep breath, restrained myself and kept repeating to myself, “FFK, do not lose that famous temper of yours!”
Had it not been for my love and respect for Chief Innocent Chukwuma, the Chairman of Innoson Motors who hosted me, Anaedoonline, the organisers of the event who invited me, Professor Kingsley Moghalu, the Chairman of the event who is a dear friend and N’digbo generally who are my in-laws, I would have turned back there and then and not graced the occassion with my prescence.
This was coupled with the fact that Mr. Ifeanyi Ejiofor himself insisted on abiding by their shameful directive in order to save the event. Amidst my protestations he volunteered to stay back and insisted that I still attend the proceedings and go ahead and make my speech.
Apart from that my decision to still go ahead was reinforced by the fact that getting annoyed and turning back or making a scene, which could have had volatile and dangerous consequences, was precisely what the FG and the DSS wanted.
The whole thing was designed to provoke me to anger and not go on with the show. I saw through that and I was not prepared to give them the pleasure.
Consequently I proceeded to the venue, went ahead with the speech and the full text was live-streamed on both Twitter and Facebook in real time. Millions of people listened to it from all over the world.
It will also be posted on my twitter handle (@realFFK) and on my Facebook page (Femi Fani-Kayode).
Given all that happened on this occasion I am constrained to ask, why is Buhari so scared of his own shadow?
By their actions the DSS not only violated the civil liberties and human rights of my in-law, lawyer, friend and brother, Mr. Ifeanyi Ejiofor, but they also proved that our Government is tyrannical, insidious, cowardly, insensitive and intolerant of opposition and dissent. They just wanted to ruin the whole occassion for no just cause.
What is it that scared them so much about Ejiofor’s presence? He is a distinguished, responsible, dedicated, loyal, diligent and hardworking lawyer and proud son of Anambra a state and he was one of many that welcomed me to his state with so much enthusiasm, love and joy. Is that a crime? Is the DSS so petty? Do they have nothing better to do?
Worse still their shameful and overzealous behaviour only made them appear to be far more delusional, unreasonable, weak and paranoid than I already believed them to be.
Thankfully their madness changed nothing because the show still went on, I delivered my speech before a warm, friendly and receptive crowd of responsible people in a beautiful and opulent setting and it was a great outing.
Many businessmen, politicians, legislators and leaders of thought were in attendance and the creme de la creme of Nnewi and Anambra were there.
They included the Speaker of the Anambra State House of Assembly, numerous members of the State House of Assembly and a representative of the Governor of Anambra state.
I thank Chief Innocent Chukwuma for hosting me in such a lavish manner and I thank Anaedoonline for honoring me by not only asking me to deliver the keynote address but also for awarding me the prestigious ‘Peoples Choice Award’.
Finally I thank my lawyer, Mr. Ifeanyi Ejiofor, for being so selfless, for displaying such magnaminity, maturity, restraint and patience and for being so gracious despite the atrocious way in which he was treated by the DSS.
He took it all in his stride and smiled all the way through just for my sake and the sake of the organisers of the event. He is indeed my man of the moment! Thanks for all.
Written by Femi Fani Kayode
Top Stories