Gospel Singer Gets Surprise Car Gift On Her Birthday (Photo)


A sensational gospel musician in Nigerian has been gifted a brand new car on her birthday. 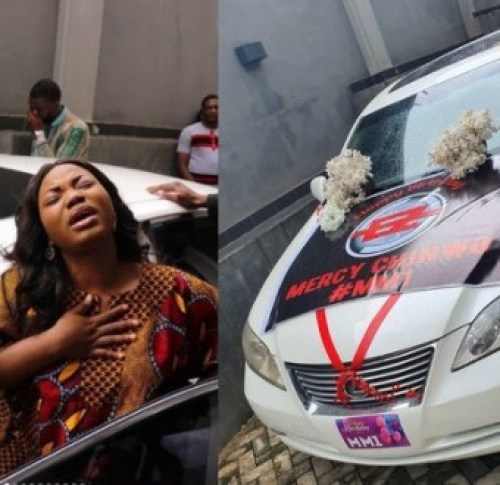 Mercy Chinwo gets car as birthday gift
Nigerian gospel singer, Mercy Chinwo received a car gift as she turned 29 years old Thursday.
The singer, who could not hold back her excitement over the unexpected gift, took to her instragram handle @mercychinwo to express how joyful she was.
“What exactly did I do to deserve all the LOVE. What did I do to you people o @eezeeconceptz.
” I apologise I’m sorry I will do it again and again…Thank you for celebrating me.
“Thank you senior @eezeetee1 for setting the pace…@josh2funny @apehharrison @officialchrismorgan thank you And they said the day just began” she wrote.
According to the News Agency of Nigeria, Chinwo got the birthday gift from her managing company in the presence of some entertainers which include Josh 2 Funny, Apeh Harrison and Chris Morgan.
The honor winning gospel vocalist and musician also celebrated her birthday with another artful culmination brand new single titled “Akamdinelu”.
The lyric of the new single “AKAMDINELU,”which simply means ’My hand is lifted up’ talks about the lifting up of hands in worship to the Almighty God.
Chinwo, a powerful vocalist and a renowned songstress in the Nigerian music industry, attained limelight in 2012 after winning the Season 2 of popular talent show ‘ Nigerian Idols.’
The EeZee Conceptz signed artiste, who is famed for her global worship anthem “Excess Love,” would hit the airwaves with the new track following her lauded single “Oh Jesus,” released earlier this year.
Chinwo developed into acting and featured in Yvonne Nelson’s film, House of Gold, where he starred alongside with Majid Michel, Omawumi and Yvonne Nelson herself.
She subsequently signed a record deal with EeZee Conceptz record label, owned by Mr. Ezekiel ThankGod (Eezee Tee).
The EeZee Tee also manages popular singers such as Frank Edwards, Preye Odede and Hilda Dokubo.
According to her, before officially launching her musical career, she lent her voice to popular artists, Sammie Okposo, Joe Praize, Buchi, Chris Morgan and Preye.
In 2015, Chinwo released her first single titled “Testimony”, then followed up a year later with the release of another single titled “Igwe”.
The song that has arguably won her more recognition is “Excess Love”, which she released in June 2018.
‘Excess love’ earned her nationwide recognition and sealed her status as one of the best vocalists in Nigerian Gospel music industry.
The Port Harcourt born singer and songwriter recording artiste has contributed to the gospel music industry with her numerous mind blowing songs.
Chinwo has dropped many hit songs which include Testimony (2015) Igwe (2016) Excess Love (2018) No More Pain (2018) CHINEDUM (2018) Power Belongs To Jesus (2019) Oh Jesus! (2019).
She won the award for Best Gospel Artiste at the CLIMAX Awards 2018.
In 2019, at the maiden edition of the Africa Gospel Awards Festival (AGAFEST), she won awards in three different categories for her song “Excess Love”, beating the likes of Sinach, Prospa Chimana and Tim Godfrey.
Top Stories

#BBNaija: “Making it To the Finale Makes me a Winner” – Liquorose