Khafi, Tacha, Mike and Seyi have gone up for eviction in the Big Brother Naija reality show as Cindy becomes Head of House. 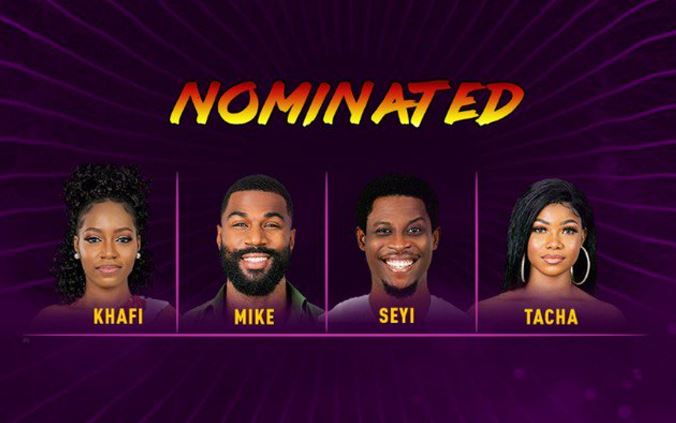 Housemates, Khafi Kareem, Mike Edwards, Tacha Akide and Seyi Awolowo have been put up for possible eviction this week.

Also, Cindy Okafor has emerged the current Head of House.

The News Agency of Nigeria reports that the eviction list was announced on Monday night in the ongoing BBNaija season four.

For the 11th week, Biggie continued with the process of populating the eviction nomination list as housemates did the nominations.

Mike Nominated Omashola and Tacha, Ike Nominated Diane and Khafi, and Elozonam put up Frodd and Tacha for Eviction.

Finally, Diane nominated Omashola and Mike while Cindy nominated Diane and Ike for Eviction.
At the end of nominations, Khafi, Mike, Tacha and Omashola were put up for possible eviction. However, Omashola used his veto power to replace himself with Seyi.

Meanwhile, NAN reports that Cindy, who is a writer and radio presenter clinched the coveted HoH title on Monday, after winning the challenge.

The challenge required the housemates to throw plastic balls into hoops created by Big Brother. Each housemate had his/her hoop.

However, the twist to the game was that the housemate with the lowest amount of balls hanging on would either win or move to the next round.

Frodd, Diane, Cindy, and Mercy advanced to the next round, after succeeding in the first round.

For the next round, housemates were instructed to fill a test tube to the brim using a teaspoon with one hand.

Big Brother instructed each housemate to indicate when they are done filling the test tubes.

After two minutes, Cindy won, and she automatically became head of the house.

As perks for winning, she received 250 bet9ja coins, immunity for the week, and exclusive access to the ‘Head Of House’ room.

When asked to pick one of the housemates to enjoy the ‘Head Of House’ room, Cindy surprisingly picked Mike.

NAN reports that housemates up for eviction will know their fates on Sunday, September 15.
Top Stories