Xenophobic attacks are not new to South Africa, as there have been several cases prior to the recent crisis which has caused a continental outrage. 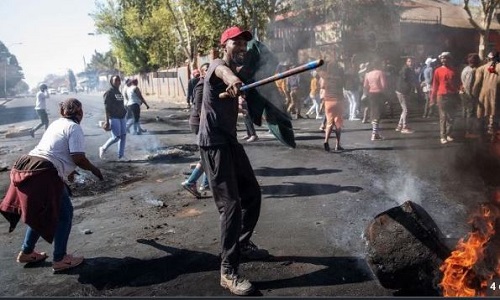 Nigerians and other foreign nationals in South Africa have been the targets of xenophobic attacks in recent weeks.

It started when a taxi driver was killed by an alleged drug dealer in Pretoria. The death of the taxi driver led to a protest, which escalated into the killing of foreigners, looting, and burning of businesses owned by foreigners in August.

The situation was brought under control, however, fresh attacks broke out on Sunday, September 1 in the build-up to an address by the Inkatha Freedom Party founder and traditional prime minister to the Zulu nation, Mangosuthu Buthelezi in Johannesburg.

The mob even walked out on Buthelezi, as he was addressing the crowd. The resulting violence led to the death of one.

The attacks resulted in diplomatic face-offs between South Africa and countries, whose citizens were affected, including Nigeria.

It would be recalled that xenophobic attacks are not new to South Africa.

This belief has been echoed by Naledi Pandor, South African minister of foreign affairs, who said that South Africans believed that Nigerians were into drug peddling, human trafficking and other vices that hurt their nation.

Below are 10 worst xenophobic attacks in South Africa ever:

1. January 1995: According to Wikipedia, immigrants from Malawi, Zimbabwe, and Mozambique living in the Alexandra township were “physically assaulted for several weeks in January 1995, as armed gangs identified suspected undocumented migrants and marched them to the police station in an attempt to ‘clean’ the township of foreigners.”

The campaign, known as “Buyelekhaya” (go back home), blamed foreigners for crime, unemployment and sexual attacks.

2. September 1998: A Mozambican national and two Senegalese citizens were thrown out of a train. The assault was carried out by a group returning from a rally that blamed foreigners for unemployment, crime and the spread of AIDS.

3. Year 2000: Seven foreigners were killed on the Cape Flats over a five-week period in what police described as xenophobic murders possibly motivated by the fear that outsiders would claim property belonging to locals.

4. Year 2005: In the last week of 2005 and the first week of 2006, at least four people, including two Zimbabweans, died in the Olievenhoutbosch settlement after foreigners were blamed for the death of a local man. Shacks belonging to foreigners were set ablaze and locals demanded that police remove all immigrants from the area.

5. August 2006: Somali refugees appealed for protection after 21 Somali traders were killed in July of that year and 26 more in August. The immigrants in townships in Western Cape believed the murders to be motivated by xenophobia, although police rejected the assertion.

6. January 2008: Attacks on foreign nationals increased remarkably in late-2007 and the first half of 2008.  On 8 January 2008, two Somali shop owners were murdered in the Eastern Cape towns of Jeffreys Bay and East London.

7. March 2008: Seven people were killed including Zimbabweans, Pakistanis and a Somali national after their shops and shacks were set ablaze in Atteridgeville near Pretoria

8. 12 May 2008: A series of riots started in the township of Alexandra (in the north-eastern part of Johannesburg) when locals attacked migrants from Mozambique, Malawi, and Zimbabwe, killing two people and injuring 40 others.

9. Year 2015: There were outbreaks of violence against non-South Africans, mostly in the cities of Durban and Johannesburg, which led to the deployment of the army to deter further unrest.

10. Year 2019: On 1 September 2019, riots and looting targeting shops owned by foreign nationals broke out in Jeppestown and Johannesburg CBD following the death of a taxi driver allegedly for trying to stop drug dealers in August.

By 3rd September around 189 people had reportedly been arrested by police for looting. 423 have been arrested by September 5, and President Cyril Ramaphosa stated that at least ten people were confirmed to have died, including two foreign nationals.
Top Stories