A Nigerian man has shared the shocking story how he died and was resurrected by his father. 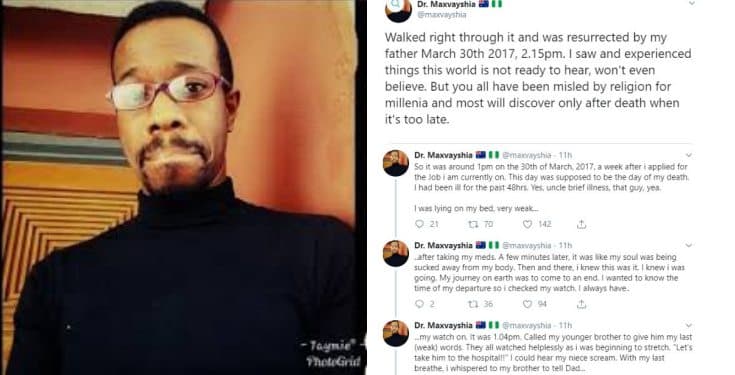 Mazvayshia shared the story on Twitter
A medical doctor has shared the shocking experience of how he died and was resurrected by his dad.
The doctor, known on Twitter as Dr Maxvayshia, gave vivid details of how he fell sick, knew he was dying and called his family members to come around on March 30, 2017. While making his last statement, he felt his soul being sucked out of his body, he said.
Then he told of transitioning to another world and gave details of what it’s like on the other side.
He also told of what it was like when he was told on the other side that it isn’t his time yet and his soul soared back to his body.
When he returned, he said he had been “brain dead” for 45 minutes and had to be placed on brain drugs for a while. He also said he had to learn to use his body again and to recollect faces and names.
He began his narration, saying: “I saw and experienced things this world is not ready to hear, won’t even believe. But you all have been misled by religion for millenia and most will discover only after death when it’s too late.”
He ended by saying, “Anyone who tells you there is no life after death has sure deceived you and u either realise it now or later.”
Twitter users were a bit confused after reading his entire thread. Some find it hard to believe. Some say he was hallucinating, while some are more interested in knowing if there really is a hell or not.
Follow his tweet below to read the story:

Walked right through it and was resurrected by my father March 30th 2017, 2.15pm. I saw and experienced things this world is not ready to hear, won't even believe. But you all have been misled by religion for millenia and most will discover only after death when it's too late. https://t.co/s5781DUTgg