The 23-year-old goal poacher has revealed his intention of featuring for the Super Eagles at senior level. 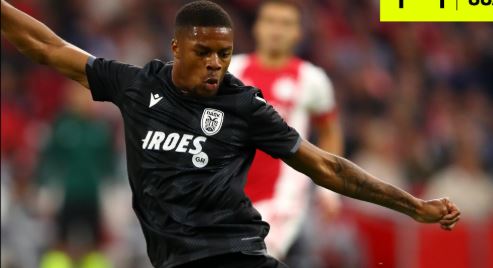 Chuba Akpom
Chuba Akpom has turned his back on England to play international football for Nigeria.
Born and raised in the European country, Akpom has represented England at every youth level between Under-16 and Under-21, featuring 41 times and scoring 18 goals.
However, Akpom disclosed he is swapping allegiances permanently, after giving the issue a great deal of thought.
"I've only just recently switched my allegiance, so I've signed the documents and hopefully in the next few weeks it will be approved to enable me to play for Nigeria," he told BBC Sport.
"I've been wanting to do that for many years now but not many people know this. It's just been a matter of sorting it out, which is now in a process. I'm looking forward to it.
"It was a personal decision. I'm Nigerian and my whole family feels very Nigerian and it will be nice to represent Nigeria.”
Akpom had trained with Gernot Rohr’s men at Barnet in March 2017, and he is excited with the prospect of linking up his childhood friend, Alex Iwobi.
"It will also be nice to link up with Alex [Iwobi] again and play for the national team. We started playing when we were younger together and to make that step to play for the national team together will be amazing,” he continued.
"I wasn't surprised because at the time he wasn't playing for England, he came out of nowhere and he started playing for Arsenal and from there he just progressed, so I wasn't surprised when he picked to play for Nigeria.
"It was the better decision to make, now he's played in the World Cup and the Africa Cup of Nations. I've always said that I'd like to play with him again for Nigeria, we've always spoke about that.
"We've played together since we were five and six years old, we grew up together. It took me a while to settle down and to get used to the environment in Greece.

"Going to play abroad and in another league has helped me, but I hope to take my career to the next level with Nigeria."
Before joining the Greek Super League outfit, the 23-year-old was sent on loan at Brentford, Coventry City, Nottingham Forest, Hull City, Brighton & Hove Albion, and Sint-Truiden following his inability to get regular action at his boyhood club, Arsenal.
This season, Akpom has scored two goals in three Greece elite division games. He would be aiming to help Abel Ferreira’s men get past AEK Athens in Sunday's league outing.
Top Stories