Shocking! Businessman Dies While Having S*x With His Lover Inside A Hotel In Lagos


A businessman has reportedly died while having s*x with his lover inside a hotel in Lagos state. 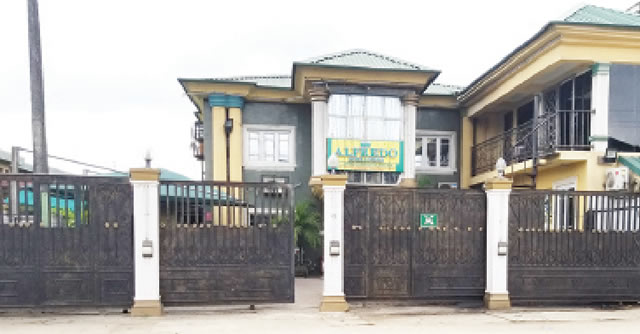 File photo
According to a rpeort by Punch Metro, a businessman, Onyekachi Nwosu, has died while having s*x with his lover, identified simply as Chima, in the Aguda area of Surulere, Lagos State.

It was gathered that Nwosu and Chima visited the Alfredo Suites around 10pm for a short-time rest, but the 36-year-old man suddenly started gasping for air.

Chima, who was jolted by her lover’s condition, rushed out of the room to alert the receptionist and others at the hotel to the development.

It was learnt that the manager of the hotel, Uche Ejionye, in company with other staff members, rushed to the room only to discover that Nwosu had died.

When PUNCH Metro visited the hotel, it was gathered that the receptionist, one Marylyn, and the waitress, identified simply as Mary, who served the room 107, where the lovers lodged, were arrested alongside Chima by personnel from the Aguda Police Division, who visited the scene of the incident.

Ejionye told our correspondent that a barman, Isaac, who saw Chima screaming for help at the reception, called him to attend to her, adding that when they got to the room to find out what had happened, they met Nwosu’s lifeless body naked on the bed.

The manager stated, “I was in the bar with some guests, who came to lodge, when Isaac suddenly rushed to inform me that Chima was panting at the reception. I immediately went to enquire what was wrong and she said something had happened in the room. The security guard and I went to the room and met Nwosu’s lying naked on the bed.

“When I asked her what happened, Chima said she and Nwosu had a round of sex and afterwards, he started shivering and that was when she rushed to call us. I told her that he was dead and called the Divisional Police Officer, Aguda Division, who instructed us not to release her.

“When the police came, Chima and two of the hotel workers, Marylyn and Mary, who served the lovers, were arrested. But I accompanied them to the station, where we all wrote statements, and later, the police, our security guard and I went back to evacuate the corpse to the Mainland Hospital’s mortuary around 2am.”

A source in the area, who spoke on condition of anonymity, said if Chima had not been apprehended, the hotel management would have been held responsible for Nwosu’s death, adding that the deceased’s car, which was parked a distance away from the hotel, was taken to the police station.

Punch Metro, learnt from another source, who also spoke on condition of anonymity, that Nwosu’s family, after being informed of the incident, refused to press charges against Chima after a doctor, who is a member of the family concluded that he died of cardiac arrest.

The source said, “One of the relatives of the deceased is a doctor and listened to Chima’s explanation that after they finished making love, he went for a shower in the bathroom and came back to lay on the bed and started gasping for air and foamy substances started coming out of his mouth before he died.

“I was told that the family said they were not pressing charges and demanded the release of his remains for burial, because the doctor said he was convinced that he died of cardiac arrest.”

The state Police Public Relations Officer, Bala Elkana, who confirmed the incident, said investigation into the matter was ongoing, adding that immediately the police were alerted on September 12, personnel were mobilised to the scene and the corpse was evacuated to the mortuary.

“We have launched an investigation into the case and also moved the corpse to the mortuary. We have questioned some persons, who we believe could shed light on what really transpired before the man died. Investigation is ongoing,” Elkana stated.
Top Stories